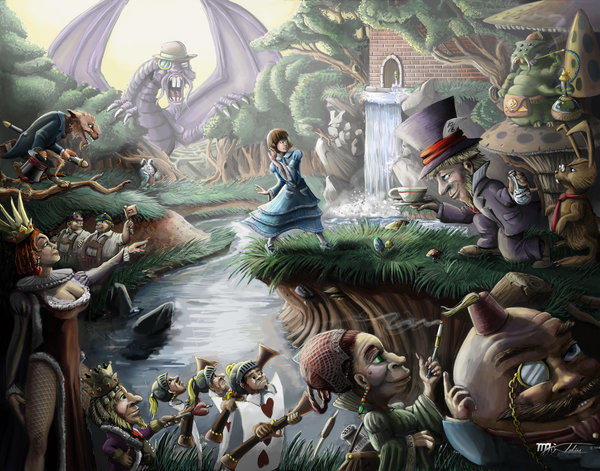 Is Lewis Carroll’s tale really about sex, drugs, and colonialism? Some say yes. Others argue it’s about eating disorders or the Wars of the Roses. Hephzibah Anderson takes a look.

To fully experience what it means to vanish down a rabbit hole, just ask the internet about hidden messages in the book that coined the term, Alice’s Adventures in Wonderland. Lewis Carroll’s fantastical tale of magic cakes and secret doors, grinning cats and warbling turtles, has never been out of print since it was first published. Over the course of a century and a half, it’s inspired films, paintings, a ballet and computer games. There’s even a neurological syndrome named after it. Yet its most voluminous by-product by far is alternate readings. Delve into the writings of generations of critics, scholars and bloggers, and this beloved bedtime classic becomes variously an allegory on drug culture, a parable of British colonisation, and the story of a heroine with a bad case of penis envy.

The book began life humbly, as entertainment for 10-year-old Alice Liddell and her sisters as they boated on the Thames with one Charles Dodgson. It proved such a hit that Alice persuaded Dodgson to transcribe it, which he duly did – using the nom de plume Lewis Carroll. Alice was the daughter of the dean of Christ Church, the Oxford college where Dodgson taught mathematics, and she wasn’t the only young girl he befriended. To the 21st Century mind, there is something that makes one deeply uneasy about this scenario. Though there is no evidence of anything untoward in Dodgson’s relationships, it’s hard not to view as suspect a grown man who enjoyed having his young playmates sit on his lap and pose for photographs, often under-dressed.

With the waning of Victorian prudery and the birth of psychoanalytical theory, Alice’s Adventures in Wonderland seemed a good deal less innocent. Re-examining the text, critics found plenty of gynaecological imagery, from the rabbit hole itself to the curtain that she must push aside. Locks and keys were seen as symbolic of coitus, and the caterpillar – well, wasn’t he just a bit… phallic? Inevitably, some saw penis envy in the text, rendering Alice’s extending neck a kind of copycat erection. And then there’s the fanning that she does before she starts to shrink, and the salt water that laps her chin once she’s mere inches tall – both acquire a decidedly masturbatory glossing.

More nuanced readings have viewed Alice’s journey as being less about sex per se and more about a girl’s progress through childhood and puberty into adulthood. Our heroine feels uncomfortable in her body, which undergoes a series of extreme changes; her sense of her self becomes destabilised, leaving her uncertain of her own identity; she butts heads with authority and strives to understand seemingly arbitrary rules, the games that people around her play, and even death.

Famed literary scholar William Empson got especially carried away, declaring that Alice is "a father in getting down the hole, a foetus at the bottom, and can only be born by becoming a mother and producing her own amniotic fluid".

Of course, sometimes a caterpillar smoking a hookah is just that – especially when he’s flanked by a magical mushroom. Since the 1960s, drug-lovers have read Alice’s antics as one big trip. The lyrics to Jefferson Airplane’s White Rabbit did a fair bit to cement the association: “Remember what the Dormouse said / Feed your head, feed your head”. From its heat-addled opening scene, there is a psychedelic vibe – besides all those pills, time moves erratically, and the grinning Cheshire Cat is here one minute, gone the next.

Of cabbages and kings

But it’s not all sex and drugs. Another strand of criticism views Alice as a political allegory. When our heroine leaps after the White Rabbit, she ends up in a place that, for all its zany, disconcerting strangeness, is ruled over by a quick-tempered queen – Dodgson reputedly had mixed feelings about Queen Victoria even though she loved his book – and has a shambolic legal system, much like Victorian Britain.

And how does Alice act in this strange land? Befuddled by the natives’ way of doing things, she tries to impose her own values with very nearly calamitous results. Couldn’t the novel therefore be an allegory for colonisation?

And on the debate rages. Alice is a parable of eating disorders, a cautionary tale about the then new-fangled symbolic algebra, a satire of the Wars of the Roses. In the wacky realm of rival theories, we all become as confounded as Alice.

In his day job, Charles Dodgson lectured on mathematics, and it’s little wonder that his stories are teeming with arithmetical and geometrical allusions. Alice is confronted with a series of puzzles from the Mad Hatter’s riddle to the Queen’s croquet game, but try as she might to solve them, they invariably turn out to have little purpose and no answer. Though Dodson was a logician, Wonderland is a realm in which illogic rules. And maybe that’s where the ultimate message of his exuberantly inventive book lies: the world is a mad place in which expectations are often frustrated. Rather than look for meaning we’d do better to simply delight in the ride.