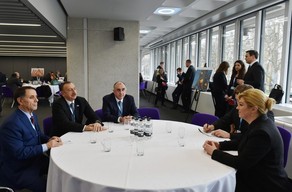 İn the meeting, the sides expressed satisfaction with development of bilateral relations between the two countries. Mutual interest has been expressed in further development of economic cooperation, realization of energy, transport and infrastructure projects.

During meeting, exchange of views on reaching mutual agreement regarding realization of joint projects have been held.