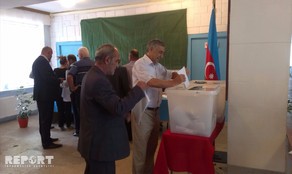 Residents of Lankaran show a selective activity in referendum on making amendments to Azerbaijani Constitution.

Lankaran city No.73, Lankaran rural No.74, Lankaran-Masalli No.75, Lankaran Astara No.76 District Election Commissions are operating in the city.

The total number of voters in Lankaran City District Election Commissions No.73 amounted to 35 315 people. 28 sites opened in which all the conditions created for voters. Web cameras have been installed at 12 polling stations.

Chairman of Lankaran City Election Commission No.73 Karim Heydarov told Report, 577 people for the first time participate in the vote. Chairman of Lankaran rural No.74 (34,748 voters) Alovsat Rufiyev said exit-poll conducted in 8 polling stations: "As of 12:00 Baku time, 33.14% of the voters took part in the voting."