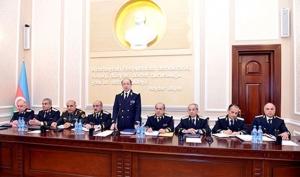 Axar.az reports citting to Apa, it was noted that the number of transactions in the notary organs exceeded 3.6 million, 350 thousand acts have been registered. In connection with these transactions were paid state duty in the amount of over 40.3 mln. AZN.

The total number of registered non-profit organizations exceeded 4300, while the number of media - more than 5,100.

It was also noted the improvement of e-services of government agencies. Over the last year the number of users 25 e-services increased by 3 times compared to 2015 and exceeded 1.8 million. At present, the work on the introduction of new services goes on.