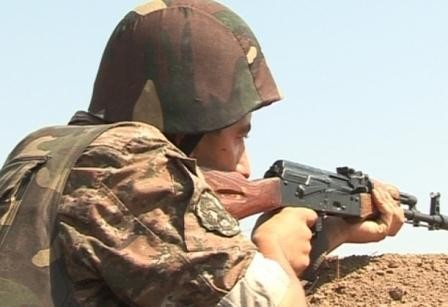 Armenia unilaterally rejected the OSCE Minsk Group co-chairs’ call for strictly respecting the ceasefire during the holidays of Novruz and Easter.


The Defense Ministry stated that the Armenian armed forces increased tension on the contact line of troops using large-caliber weapons, mortars and grenade launchers on the eve and during Novruz holiday. “The Armenians fired on the Azerbaijani positions, villages located on frontline and non-military facilities. As a result of the ceasefire violations by the Armenians in different directions, extended serviceman Rustamov Asad Vahid was lightly wounded on March 19 and extended serviceman, junior sergeant Hasanov Nijat Jabrayil on March 20. Servicemen received medical aid and there is no threat to their lives. The Armenians are regularly causing tension on the frontline through provocative acts on response to the mediators' peace initiatives and it is no more surprising. The Azerbaijani side is calling on the mediators and all international organizations not to succumb to misinformation spread by the Armenian side and properly assess its provocations.”


The Defense Ministry noted that the criminal regime in Armenia bears full responsibility for the punitive measures to be taken by Azerbaijani armed forces against the enemy and losses it will suffer from now on.