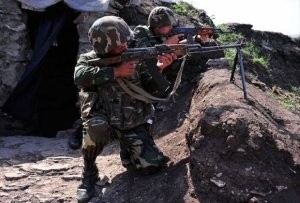 In recent days, Armenian side, suffering large losses in the occupied territories, tries to avenge these failures by increasing provocations on Azerbaijani-Armenian border.

It was told in Azerbaijani Defense Ministry.

According to the information, the enemy, losing superiority in the operational condition, intends to involve some international organizations, including member states of military and political organization, which Armenian is also a member, in participation in the conflict by increasing tension on the border.

Also, it was noted that on March 27, units of Armenian armed forces violated the state border in the territory of Gazakh region and attempted to enter the territory of Azerbaijan. As a result of vigilance of the units of the Azerbaijani Armed Forces located in this direction, action of the enemy revealed in advance and relevant measures carried out to prevent the attempt. The occupiers, suffering losses forced to retreat.

Management of Ministry of Defense extended condolences and wishes patience to the family and relatives of the victims!

The ministry stated operational condition in that direction is under full control of our troops. Azerbaijani side calls all international organizations to condemn Armenian provocations and properly assess occurred incidents.