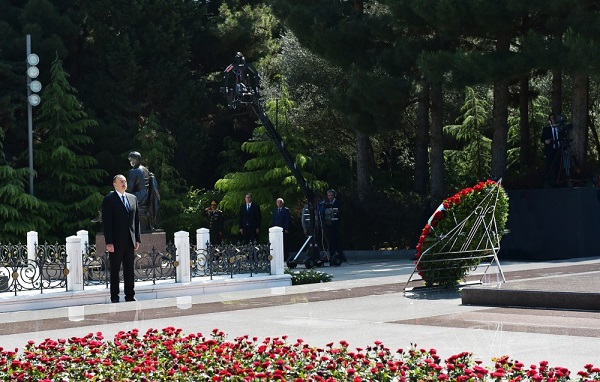 May 10 marks the 94th birthday anniversary of the architect and founder of the modern independent state of Azerbaijan, outstanding statesman, brilliant son and national leader of the Azerbaijani people Heydar Aliyev.

Axar.az reports citing Report news agency, on the birthday anniversary of the savior of the Azerbaijani people, President Ilham Aliyev, family members, relatives and friends of the national leader visited the Alley of Honors.

President Ilham Aliyev laid a wreath at the grave of national leader Heydar Aliyev, and paid tribute to him.

The national anthem of Azerbaijan was played.

Then, the head of state and his family members laid flowers at the graves of prominent ophthalmologist, academician Zarifa Aliyeva, outstanding statesman Aziz Aliyev, renowned doctor and scientist Tamerlan Aliyev.

The ceremony was also attended by state officials, ministers, heads of committees and companies, members of Azerbaijani Parliament.