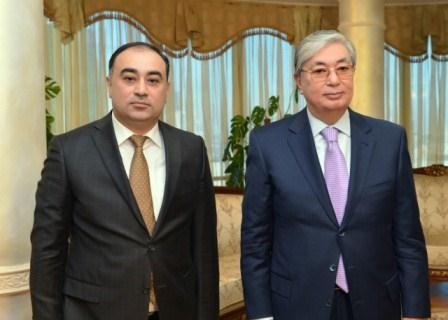 Kazakh Speaker informed that he was going to visit Baku on April 25-27 to attend the 7th Global Forum of the UN Alliance of Civilizations (UNAOC), due in the Azerbaijani capital.

Kassym-Jomart Tokayev said that the Azerbaijani-Kazakh cooperation has strategic character. According to him, parliaments of two countries effectively interact both at the bilateral level, and within PA of the CIS.

Speaking about the fields of development of relations between Azerbaijan and Kazakhstan, Ambassador Rashad Mammadov has noted that the two nations historically are friends and brothers. It has been underlined that the coexistence of many nationalities in Kazakhstan and Azerbaijan in the conditions of peace and mutual trust bases on rich tolerant and multicultural traditions.

Noting that the two peoples are closely connected with each other by history, culture and traditions, the diplomat stated that now political and economic relations between Azerbaijan and Kazakhstan are at the high level, stressed the necessity of further development of the relations between legislatures of two countries.

The sides noted that Azerbaijan and Kazakhstan have an important geostrategic position and are located along the line of regional transport corridors.

The sides had comprehensive exchange of views on a number of questions of mutual interest.