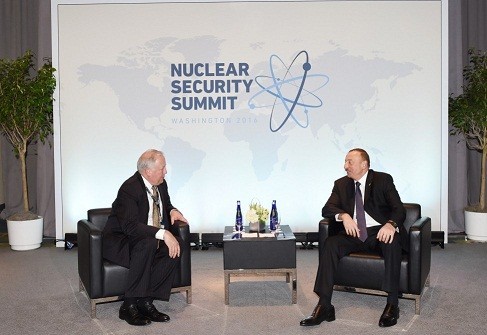 Azerbaijani President Ilham Aliyev on Friday met with Thomas Shannon, Under Secretary of State for Political Affairs at the US Department of State in Washington.

The sides noted at the meeting that bilateral relations between Azerbaijan and the US are successfully developing in various fields. The Azerbaijani president expressed his satisfaction with the results of his successful visit to the US. He said that the visit to the United States and the meetings that took place during the meeting contributed to bilateral relations, which rely on strategic cooperation, entering a new stage, APA reported.

Thomas Shannon said that the successful meetings in Washington of the Azerbaijani president were followed with great interest. He said that the US attaches great importance to relations with Azerbaijan, and expressed hope that the relations in various spheres will continue to expand successfully.

During the meeting, the two sides exchanged views on the Nagorno-Karabakh conflict as well as prospects of cooperation in the energy, economic and trade spheres.