The Washington Times: The main goal of Armenia... 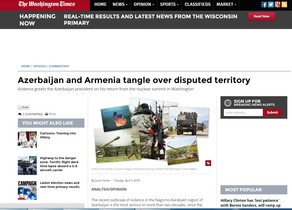 In The Washington Times American newspaper has published an article over escalation of the conflict on the contact line between Armenian and Azerbaijani Armed Forces.

The article notes that the recent outbreak of violence in the Nagorno-Karabakh region of Azerbaijan is the most serious in more than two decades.

The author, political commentator Justin Amler binds the latest developments in the occupied territories with the Armenian reaction to Ilham Aliyev's visit to America since it came at the exact time that Azerbaijani President Ilham Aliyev attended the Nuclear Security Summit in Washington at the invitation of President Obama, in a further sign of U.S. recognition of the growing and strategic role that Azerbaijan is playing in both global nuclear security and infrastructure, as well as the fight against global terrorism.

Speaking of lost its political and economic independence of Armenia, the author writes how Armenian nationalism and aggression against Azerbaijan, Armenia dragged into the abyss.

The expert stresses that " Armenia’s attacks on settlements near the front line of the region were designed to provoke a response from the Azerbaijani military forces, which they did. It was meant to divert the positive attention Azerbaijanis had been receiving in the news, and instead paint them as aggressors."

"The 20 percent of Azerbaijani land, including Nagorno-Karabakh, that Armenia occupies is an economic drain on the country and one that will only continue to affect it negatively. Armenia may dispute its status, but it is land that is recognized as sovereign Azerbaijani land in the international community, through U.N. Security Council resolutions, General Assembly resolutions and even the Parliamentary Assembly of the Council of Europe. The U.S. State Department has condemned the violence and called for negotiations, but once again it seems to shy away from its own position of a few years back when it acknowledged that “Armenia continues to occupy the Azerbaijani territory of Nagorno-Karabakh and seven surrounding Azerbaijani territories.”