"We get out of this situation with minimal losses" 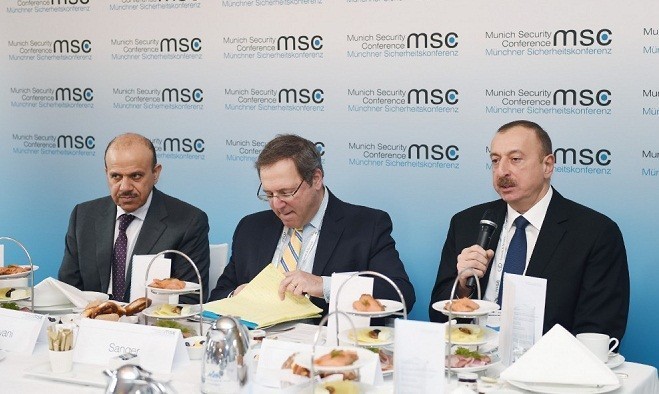 We were trying to forecast the current situation in which we found ourselves in a period of decline in oil production – maybe in 15-20 years. We were not prepared for this period, said Azerbaijani President Ilham Aliyev.

The head of state made the remarks Feb. 12 at the Energy Security Roundtable as part of the Munich Security Conference.

According to the president, no one expected oil prices to drop by four times. “We were not ready, neither was anyone else. Therefore, we had to determine how to balance the budget in a short period of time, how to continue social programmes and the funding of which investment projects would be cut. It was nothing easy as we were used to prices higher than 100 dollar a barrel. Of course, we had a development plan intended for a long term. We had the “Azerbaijan 2020: the Vision of the Future” Development Conception based on a higher oil price. Now the oil price is low,” he stressed.

The Azerbaijani president noted that it was a real challenge.

“However, I would like to reiterate that thanks to economic diversification and investment in infrastructure, I think we managed to get out of this situation with minimal losses,” said Aliyev.