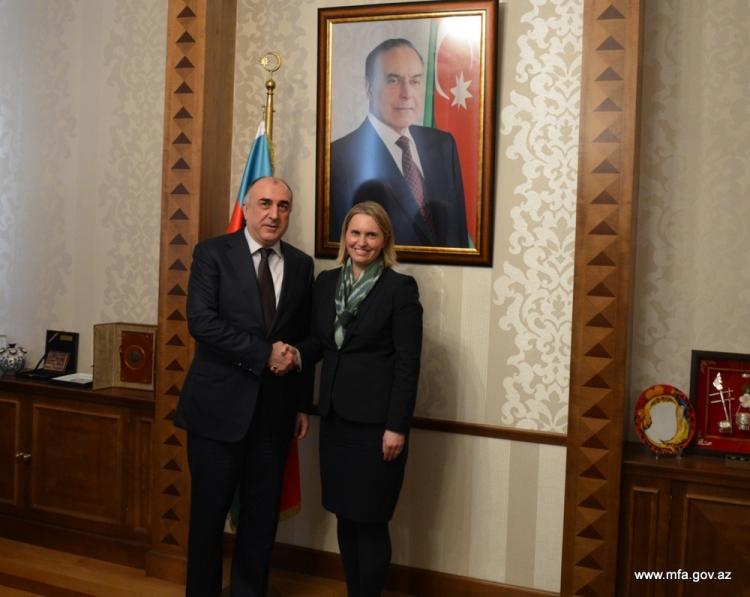 Highlighting the necessity of reinforcing the political dialogue on strategic partnership between the two countries, Bridget Brink said that the U.S. attaches importance to the relations with Azerbaijan and noted the necessity of further development of current bilateral cooperation.

The U.S. official reiterated that the contributions of Azerbaijan to the peacekeeping operations in Afghanistan in the framework of the fight against terrorism are highly appreciated.

Mammadyarov noted that Azerbaijan is also interested in further development of the relations with the U.S.

Speaking about the fundamental economic reforms conducted in Azerbaijan, Minister Mammadyarov underlined the importance of redoubling joint efforts for the development of economic relations and active involvement of US companies in the non-oil sector of Azerbaijan.

Briefing about the negotiation process on a resolution of the Armenia-Azerbaijan Nagorno-Karabakh conflict, Mammadyarov underlined the importance of strengthening the efforts by the U.S. along with other OSCE Minsk Group Co-Chairs for the fair and just settlement of conflict based on the UN Security Council resolutions. The minister said that the attempts to alter the internationally recognized borders of states by use of force are unacceptable.

At the meeting, the sides discussed the energy and transport projects realized by the initiative of Azerbaijan, especially Baku-Tbilisi-Kars railway and Southern Gas Corridor.

Furthermore, the sides exchanged views on issues of mutual interest.