PACE adopts declaration on the peaceful resolution of NK 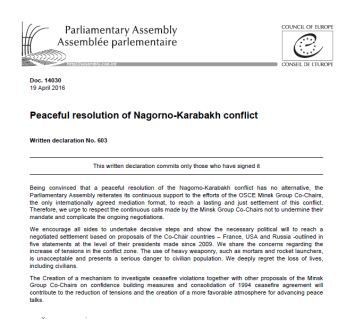 The Parliamentary Assembly of the Council of Europe (PACE) has adopted written declaration on the peaceful resolution of Nagorno-Karabakh conflict.


The declaration signed by 44 deputies of PACE, says: “Being convinced that a peaceful resolution of the Nagorno-Karabakh conflict has no alternative, the Parliamentary Assembly reiterates its continuous support to the efforts of the OSCE Minsk Group Co-Chairs, the only internationally agreed mediation format, to reach a lasting and just settlement of this conflict. Therefore, we urge to respect the continuous calls made by the Minsk Group Co-Chairs not to undermine their mandate and complicate the ongoing negotiations”.


“We encourage all sides to undertake decisive steps and show the necessary political will to reach a negotiated settlement based on proposals of the Co-Chair countries – France, USA and Russia -outlined in five statements at the level of their presidents made since 2009. We share the concerns regarding the increase of tensions in the conflict zone. The use of heavy weaponry, such as mortars and rocket launchers, is unacceptable and presents a serious danger to civilian population. We deeply regret the loss of lives, including civilians.”

Its reported that the Creation of a mechanism to investigate ceasefire violations together with other proposals of the Minsk Group Co-Chairs on confidence building measures and consolidation of 1994 ceasefire agreement will contribute to the reduction of tensions and the creation of a more favorable atmosphere for advancing peace talks.