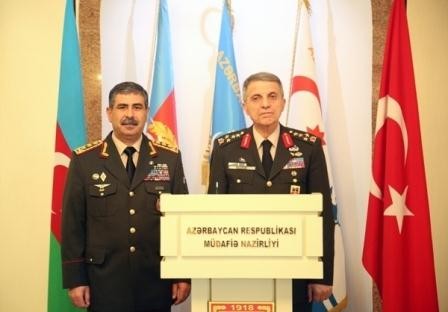 In accordance with the protocol, the Turkish army general signed the ministry’s Book of Honor.


Zakir Hasanov gave detailed information about the military-political situation in the region, noting that Azerbaijan-Turkey military cooperation is taking place on a bilateral basis and at the NATO level. He emphasized the existence of huge potential for the development of bilateral ties in the military, military-technical and military-educative fields.

Defense Minister stressed that cooperation between the two countries will expand rapidly with the support of the heads of state, on the basis of the agreement between military bodies and approved annual cooperation plans.

In turn, Mendi said that ties between our countries are historically rooted and based on the traditions of good neighborliness. He stressed that Turkey is an important partner of Azerbaijan.


Then, further prospects of military cooperation were discussed.