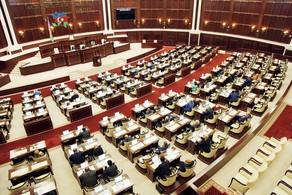 The agenda of the next plenary session of Milli Majlis (Azerbaijani Parliament), which will be held on May 17, has been unveiled.

It was told by the parliament's spokesman Akif Tavakkuloghlu, discussion of 25 issues is planned in the meeting.

According to him, firstly, changing the composition of the parliament's committees will be considered.

At the same time, approval of the agreements and documents, signed between the Azerbaijani government and governments of several countries, changes and amendments to several laws planned.

In addition, changes and amendments to the Migration, Forest, Criminal, Labor Codes as well as to the Code of Administrative Offences will be discussed in the meeting.

'On science' draft law will be discussed in the second reading.