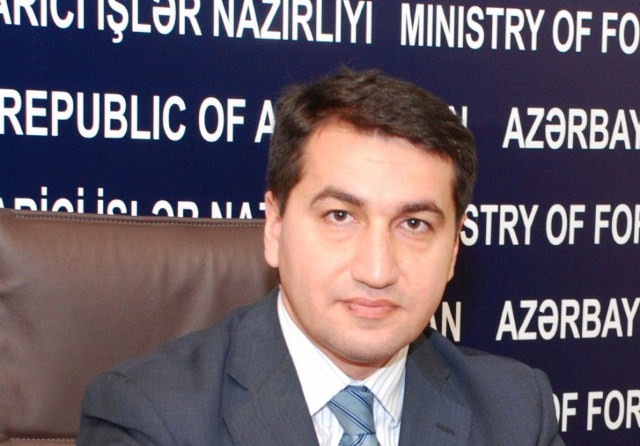 Foreign Ministry of Azerbaijan has sent to "The Associated Press" a letter of protest for designating the total territory of the Armenian-occupied Nagorno-Karabakh region of Azerbaijan as 12,000 square kilometers in a news release dedicated to the Vienna meeting of the Azerbaijani and Armenian presidents, Foreign Ministry spokesman Hikmat Hajiyev informed on Wednesday.

He noted that the total territory of Azerbaijan’s Nagorno-Karabakh region is 4,400 square kilometers.

Hajiyev added that regarding the Armenian-Azerbaijani conflict the word “dispute” has been used again in the news release.

“This distorts the true nature of the conflict and runs contrary to the terminology applied in connection with the conflict. In addition, the attempt to burden the conflict with religious overtones in the material is a wrong approach,” he said.

Yerevan is trying to resort to various methods, including the religious factor to guise its occupation and aggression against Azerbaijan, as well as to mislead the international community, according to the spokesman.

Armenia’s territorial claims lie at the core of the conflict, he said, stressing that Armenia, in contravention of international law, occupied Azerbaijani territories and pursued a policy of ethnic cleansing against the Azerbaijani population in the occupied territories.

Given the senility of the conflict and the importance of properly informing the international community, the Azerbaijani side urges The Associated Press to make a correction to the news release, clarify the facts before spreading and consider other points of concern, Hajiyev summed up.