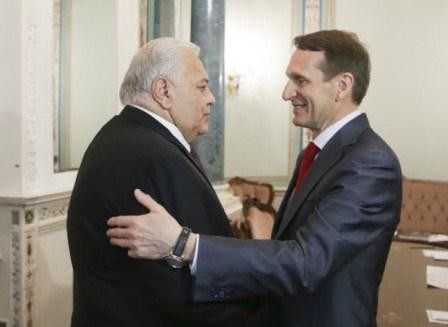 Speaker of Azerbaijan`s parliament Ogtay Asadov has today met with chairman of the Russian State Duma Sergey Naryshkin on the sidelines of the Plenary Session of the Interparliamentary Assembly of the Commonwealth of Independent States (IPA CIS) in St Petersburg.

Naryshkin hailed interparliamentary ties between the two countries. He also highlighted the parliamentary elections to be held in Russia in September.

Asadov noted the role of the Azerbaijani and Russian presidents in elevating the bilateral ties to the level of strategic partnership. He hailed the existence of “a firm legal basis” for the development of relations: “More than 200 documents have been signed during the visits of delegations so far, with 51 documents under preparation for signing.”

Asadov also pointed to the Azerbaijani diaspora`s support for the Russian government`s activities and contribution to the development of the bilateral relations.