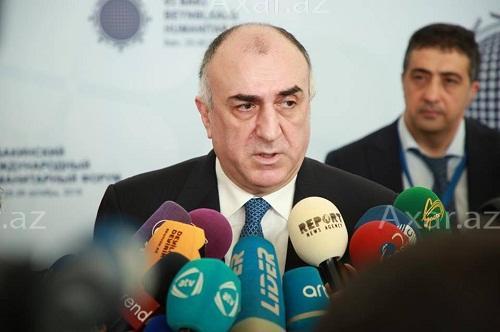 On May 22, Foreign Minister Elmar Mammadyarov had a telephone conversation with his Ukrainian counterpart Dmitry Kuleba.

Axar.az informs that, the statement came from the Foreign Ministry.

Touching upon the current global pandemic situation, the ministers exchanged views on the measures taken by states to combat the health crisis. They stressed the importance of mutual support and solidarity in the current situation.

The ministers discussed issues of bilateral cooperation and stressed the importance of developing relations between the two countries, especially in the economic and energy spheres, as well as expanding cooperation in the fields of transport, transit and logistics in accordance with the national interests of the parties.

The parties also exchanged views on other issues of mutual interest.

According to the Foreign Ministry, the sides exchanged views on the measures taken by both countries in the fight against the global pandemic and stressed the importance of international solidarity in this regard.

During the telephone conversation, they exchanged views on the development of bilateral strategic relations, including the expansion of economic and trade ties, especially in the current situation, the implementation of strategic projects.

The ministers also discussed issues of cooperation, including relations within international organizations, especially the UN and the Eastern Partnership.

Emphasizing the strong friendly relations between the peoples of Azerbaijan and Georgia, the ministers congratulated each other on the upcoming national days.