Next monitoring will be held on line of confrontation 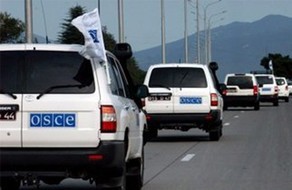 In accordance with its mandate, the Office of the Personal Representative of the OSCE Chairperson-in-Office plans to conduct the next ceasefire monitoring exercise on the LOC of the armed forces of the Azerbaijan and Armenia, near the village Orta Qarvend of Agdam region on August 3, 2016.

It was told in the press service of Azerbaijani Ministry of Defense.

The Personal Representative ambassador Andrzej Kasprzyk and his field assistant, Hristo Hristov will carry out the monitoring exercise from the territory of Azerbaijan controlled by its Armed Forces.

The Personal Representative`s field assistants, Jiri Aberle and Peter Svedverg will participate on the other side of the LOC, in the territory of the Republic of Azerbaijan occupied and controlled by the armed forces of Armenia.