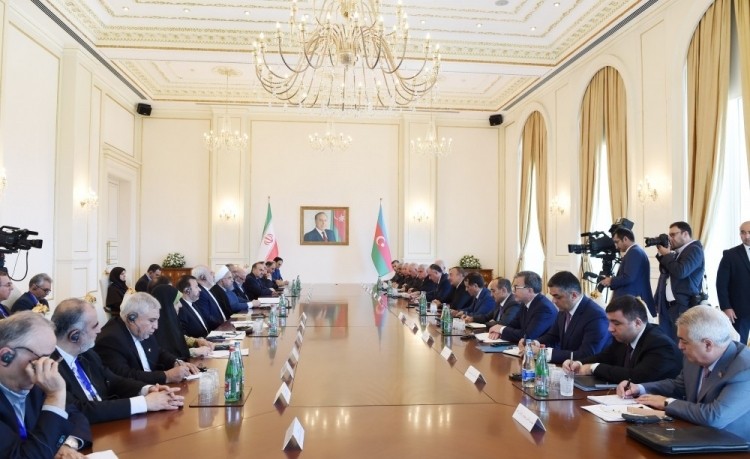 President Ilham Aliyev said at the wide meeting that he gives high importance to this visit.


The head of state said that he believes the visit will be successful and will contribute to the development of relations.

"These visits have shown that our relations are established at the highest level. During the bilateral meeting today, we discussed political and economic issues. There is a huge mutual understanding between us and we are building our relations based on this understanding. Relations between the two countries have been developing quite rapidly in recent years. This development has reached its highest level in the history of the 25-year-old relations. I believe that political, economic and other relations will develop further. Several documents will be signed today. Iran-Azerbaijan relations will continue to develop on the basis of friendship," said President Ilham Aliyev.


In his turn, Iranian President Hassan Rouhani mentioned that the Azerbaijani president’s visit to Iran was very successful.


"Today the most important documents will be signed between the two countries. The trilateral meeting will be held tomorrow. We’re going to analyze different issues during the trilateral meeting. I am confident that the friendly relations between the two countries are upon sincere bases. As two neighboring and brotherly countries, we must bring our relations up to the highest level. Our peoples want fine bilateral relations to be built and to play a role in strengthening peace and stability in the region," said the Iranian president.