Azerbaijan is ahead of Armenia 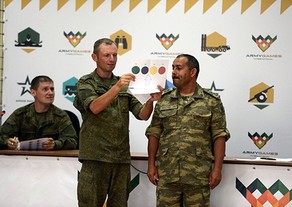 Azerbaijani tankers destroyed all targets during the Tank biathlon competition as part of "International Military Games - 2016" and advanced to semifinal being ahead of Armenian team.

It was told in the press service of Azerbaijani Defense Ministry in Tank biathlon competition consisting of 15 stages including 54 tank crew from 18 countries, Azerbaijani team will take part in semifinal among other teams from 12 countries.

Azerbaijani tankers will compete with group consisting of 4 teams in the semi-final races including Russia, Serbia and India on August 11.

4 teams will take part in the final of the tournament on August 13.

Azerbaijani tankers are in 5 th place at "Tank biathlon" contest .