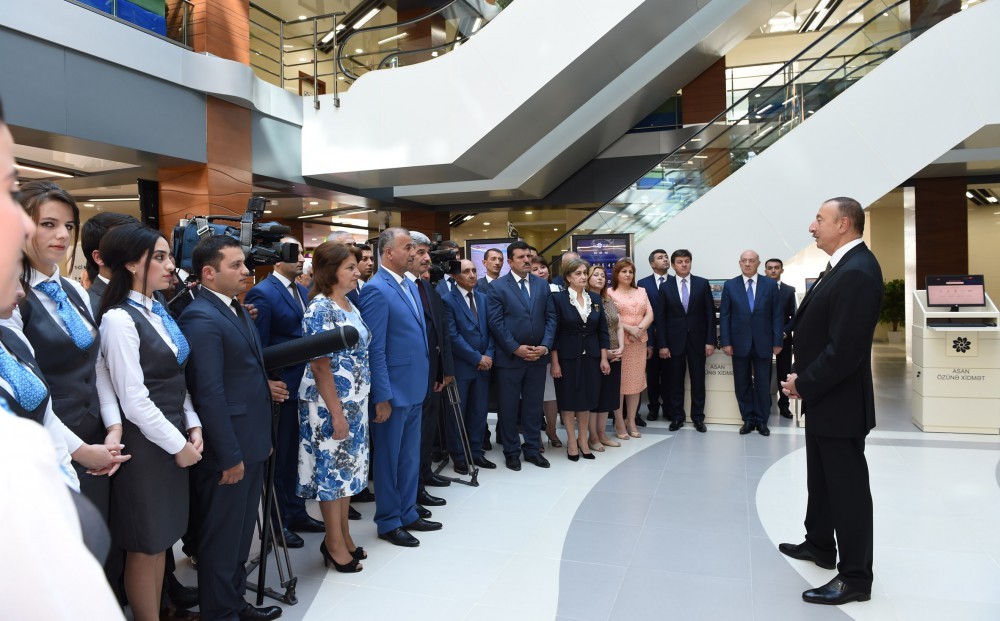 “ASAN xidmet” centers are free of corruption, bribery, bureaucracy and other negative facts, said Azerbaijan’s President Ilham Aliyev at the meeting with members of Gabala district’s public and the staff of the “ASAN Xidmet” regional center.

“First of all, it is an example, an example for each public body,” said the president.

“Secondly, it shows that we can fix and heal the wounds of our society, because nothing undermines society as much as corruption and bribery.”

“An "ASAN xidmət" center starts functioning in the city of Qabala today. I congratulate you on this wonderful and memorable event,” noted Aliyev. “It is a beautiful building. From an architectural point of view, it will impart additional beauty to Gabala. Of course, the highest standards are applied in this building.”

This is the 10th service center, said the president.

“To date, there are nine "ASAN xidmet" centers in Azerbaijan: five in Baku and four in other cities - Ganja, Sumgayit, Sabirabad and Barda. The 10th center opens in the city of Gabala today, and from now on our people will be able to use these excellent facilities here.”

Aliyev noted that "ASAN xidmet" is a product of Azerbaijan.

“Over the course of three and a half years, it has received about 11 million applications.

This represents a very serious progress in the sphere of public services,” he explained.

“Essentially, this is a revolution, because we all remember too well that sometimes our people had to wait for days and weeks to get a document or certificate. Many were faced with certain difficulties. And now people can enjoy all these opportunities very easily.”

The rate of customer satisfaction with "ASAN xidmet" is very high, he said.

“Analyses are carried out, opinion surveys are conducted, and 98 percent of the population is pleased with the services provided by the centers,” noted the president.

“After all, there is complete transparency, no bureaucracy or bribery, and people are provided with a cultured service. In fact, this is the way it should be. "ASAN xidmet" is a very important institutional center not only in the field of public services, but also for society as a whole.”

Aliyev said that applicants have already received the necessary documents in the new conditions.

“As I mentioned, the vast majority of citizens are satisfied with these services. In addition to that, 10 buses provide mobile services. We are expanding the functions of "ASAN xidmet.” At present, more than 200 services are provided,” he said. “In the near future, we will start providing services related, in particular, to utilities and the issuance of visas.”

“Today, we are witnessing an influx of visitors to Azerbaijan. The natural potential of our country, the beauty of our cities, the stability and security observed in Azerbaijan, of course, attract more and more tourists,” noted the president. “At the same time, a role is certainly played by the prestigious international events held in Baku and other places of our country: the European Games, Formula 1 with an audience of 500 million people, etc.

This year, the city of Gabala hosted the eighth international music festival. All these activities, of course, turn Azerbaijan into an even more attractive country for tourists. I am confident that the launch of "ASAN VISA", which is scheduled for October, will pave the way for even more people.”

“I was told today that in the summer months the many hotels of Gabala have no available rooms,” said Aliyev. “Citizens of our country and foreigners come here, have rest, get acquainted with Azerbaijan and admire the beauty of Gabala.”

The president also noted that tourism is an area that has great importance for any country.

“I am glad that the steps being taken to popularize our country in the world also serve the development of tourism,” he said.

“In a short time, in three and a half years, "ASAN xidmet" has earned great approval in society by creating, as I said, a revolution in the public services sector,” he added.

“In the future, we will increase the number of "ASAN xidmet" centers. This center will provide services to 10 districts – Balakan, Zagatala, Gakh, Shaki, Gabala, Ismayilli, Agsu, Shamakhi, Gobustan and Oguz,” noted the president. “These districts are home to more than 900,000 people. Another "ASAN xidmet" center will be opened in Masalli this year.

After that we plan to set up an "ASAN xidmet" center in Shaki. Thus, it will be easier for people to use this service.”

Most of the people working in "ASAN xidmet" centers are boys and girls, said Aliyev.

“This is great, because we need to work hard on providing employment opportunities to women. We should aspire to do that. In general, employment is a state program in Azerbaijan. Unemployment in Azerbaijan is at a low level, but it is still there,” he explained.

“Therefore, the launch of "ASAN xidmet" centers also means the creation of jobs. This center has provided 153 people with jobs, and the majority of employees are young people. The youth working in such a beautiful environment prepares itself for the future in order to take a worthy place in society. As I was informed, a total of 45 volunteers will work in the center for the benefit of our people.”

President noted that the volunteer movement in Azerbaijan started with "ASAN xidmet".

Eight thousand young people voluntarily worked in different "ASAN xidmet" centers, he said adding that currently, a total of 700 volunteers work in all the centers.

“These volunteers, at the same time, successfully participated in the international events conducted in Baku,” he added. “In particular, they have played a very important role in last year's European Games and Formula 1 this year. I acknowledged the work if volunteers who did a great job in the first European Games. They were awarded with presidential diplomas. In other words, this is a very serious public initiative.”

“Expansion of the volunteer movement is in the interests of our society,” said the president. “The desire to become a volunteer shows the good intentions of our people. In order to unselfishly help someone and contribute to our common cause, people do this in their own free time. In other words, this is a manifestation of very serious and nice intentions.”

“I am glad that a class of volunteers has formed in Azerbaijan, and the vast majority of it are young people,” he added. “The younger generation is growing up in an atmosphere that prompts it to contribute to our common cause, strengthen the state and help those in need. This is the function and purpose of volunteering.”

“Therefore, just look at the serious, large and comprehensive impact of the decision we made three and a half years ago, primarily in the field of public services,” said Aliyev. “On the other hand, “ASAN xidmet” centers are free of corruption, bribery, bureaucracy and other negative facts. First of all, it is an example, an example for each public body.

Secondly, it shows that we can fix and heal the wounds of our society, because nothing undermines society as much as corruption and bribery. “ASAN xidmet” is the frontrunner in this field. I have repeatedly said this in my speeches. I have said that every state body should work as transparently, and our people see that. This is why they approve of the work of the service.”

“From now on, the people of Gabala and surrounding districts will benefit from this service and we will further expand the functions of "ASAN xidmet" in the future,” noted Aliyev.

“Wherever we are not pleased with the situation and where there are negative phenomena, we will organize these functions by means of "ASAN xidmet.”

“I am glad that the 10th center is opening in Gabala. Gabala is one of the most beautiful places in Azerbaijan,” said the president. “Gabala has a very rich history. It is a historic city and region. At the same time, it has beautiful nature.”

The development taking place in Gabala in recent years corresponds to this beauty, this history and this nature, he added.

“As people living here, you can probably see how much prettier Gabala has become in recent years. New homes, tourist facilities and public buildings are built,” he noted. “Several years ago, an international airport was built here on my instructions. Some people were rather skeptical about this issue. Today, flights are organized in different directions. We have built the Heydar Aliyev Center, which is a beautiful historical building, the Cultural Center, many hotels, the international shooting center, and this work continues. While getting acquainted with the situation today, I watched the construction of a new shooting center from the window.”

The development of Gabala is beyond doubt, said the president.

“Those who live here can confirm that,” he added. “I am also very happy about this because Gabala is the second tourist center in Azerbaijan only to Baku. All of the work here is done with a lot of care and taste. Visitors, of course, can see and appreciate that.

Additional measures will be taken to further develop Gabala, noted the president.

“More funding will be made available. The main issue on the agenda is a drinking water project. It is being implemented with the mediation of foreign banks,” he explained. “This is why there is a certain delay. If we did it at the expense of our internal resources, it would have been completed long ago. However, I do hope that the problem of drinking water and sewer lines will be completely resolved in the near future.”

Gasification in Gabala district is close to 70 percent, said Aliyev.

“Given the terrain of the district, I believe that it is a good indicator,” he noted. “There is a need in the construction of intercity roads. We will deal with this and ensure further development of Gabala district.”

“Once again, I congratulate you on this wonderful event and wish the people of Qabala continued success. Thank you,” said the president.