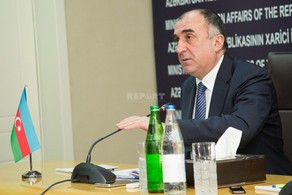 "Over the last 2 decades, the EU-Azerbaijan cooperation has tremendously grown and gradually evolved into a large-scale partnership in many areas of shared interest. Both legal documents have greatly contributed to this process.

We have obvious shared interests in a wide variety of areas and there is still much untapped potential in our cooperation. Submission of the draft Strategic Partnership Agreement (SPA) in the margins of Riga Summit was a clear signal reaffirming the importance that we attach to our bilateral relations. Development of long-term relationship with the EU and its Member States based on principles of equal partnership and mutual benefit is one of the key aspirations of Azerbaijan’s foreign policy".

"We do believe that the SPA will provide a solid legal foundation for enhancing EU-Azerbaijan engagement in a most comprehensive manner and we look forward to launching official negotiations once the negotiating mandate is formally approved by the EU’s Foreign Affairs Council. Let me, dear colleagues, express our expectation that it will occur soon. We are ready for intensive dialogue on upgrading our legal framework, which should reflect current realities and ambitions, and will promote EU-Azerbaijan bilateral cooperation for years to come.

Discussions held with Federica during her visit to Baku injected a new dynamism into EU-Azerbaijan interaction. The upcoming months seem to be promising ones in our bilateral political agenda, including the parliamentary dimension, and we will spare no efforts to keep that momentum going. The members of Parliamentary Cooperation Committee will pay a goodwill visit to Baku this month with the aim of reviving inter-parliamentary dialogue. We also look forward to the forthcoming visit of COEST mission to Baku as another opportunity to discuss issues of mutual interest with EU Member States", E.Mammadyarov said.

"We stated that we were building our relations with the EU based on bilateral track of the Eastern Partnership, however we never excluded the potential and significance of its multilateral cooperation. We have always advocated for its realization through practical implementation of feasible and tangible projects in areas of shared interest, which could deliver concrete results through concrete actions based on concrete commitments. The timely implementation of the Southern Gas Corridor is of a strategic importance in this context. In our firm understanding, transport is another key area which could greatly advance mutually-beneficial cooperation among interested partners within the Eastern Partnership multilateral track.

However, inclusive multilateralism is hindered by protracted conflicts in the region. Territorial integrity and inviolability of borders of Azerbaijan is not less important than other EaP partners. We hail the EU's explicit support to these key principles in its recently adopted Global Strategy. The sooner withdrawal of Armenian armed forces from occupied territories will serve to the EU objectives in fostering regional cooperation in South Caucasus and beyond it", Azerbaijani FM added.