First meeting of Contact Group on aggression to be held 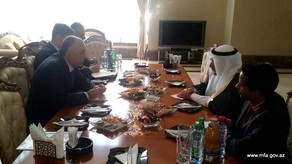 Foreign Minister Elmar Mammadyarov met with Iyad bin Amin Madani, Secretary-General of the Organization of Islamic Cooperation who is on a working visit in Azerbaijan.

During the meeting, the sides exchanged views on the level of cooperation between Azerbaijan and the OIC, its future priorities, bilateral relations with OIC Member States and other issues of mutual concern.

Secretary-General Iyad bin Amin Madani congratulated the State and People of Azerbaijan on the occasion of Eid al-Adha. He said that he highly appreciates the active role of Azerbaijan as an OIC Member State and its contribution to the activities of the Organization. Describing Azerbaijan as a country where the multicultural traditions and religious values are well preserved, Secretary-General expressed his confidence that the cooperation with Azerbaijan will further continue at the highest level.

Minister Elmar Mammadyarov stressed that Azerbaijan attaches great importance to the relations with the OIC and emphasized that the Organization is a favorable platform for further development of bilateral and multilateral cooperation with Member States.

Informing about the current status of the negotiations on the settlement of the Armenia-Azerbaijan conflict, Minister Elmar Mammadyarov expressed his gratitude to the OIC and Member States for unequivocally supporting Azerbaijan’s fair position on the conflict. Praising the establishment of the Contact Group in the framework of the Organization of Islamic Cooperation on the aggression of the Republic of Armenia against the Republic of Azerbaijan, he expressed his confidence that the activities of the Group will contribute to the resolution of the conflict.

At the meeting the sides expressed their satisfaction with the planned the very first meeting of the Contact Group to be held during the upcoming session of the UN General Assembly.

Secretary-General expressed his gratitude to our country for the initiative to host the Islamic Solidarity Games in Azerbaijan in 2017.

Minister Elmar Mammadyarov noted that as it was case with the first European Games, “Formula-1” European Grand Prix and other high-calibre events, the Islamic Solidarity Games will be organized at the highest level.
Minister emphasized that as an active OIC Member State Azerbaijan will continue to further contribute to the implementation of the issues on the agenda of the Organization.

At the meeting the sides also noted the importance of strengthening the Islamic solidarity in the framework of the OIC.