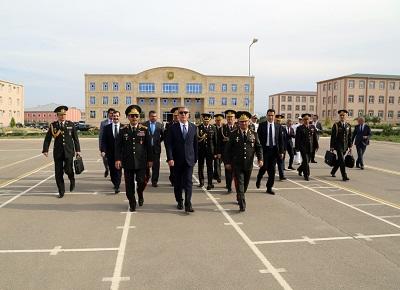 The ministers got acquainted with the combat training and social conditions of the military personnel, reviewed the new weapons and military equipment available at the military unit, as well as military infrastructure facilities.

Defense Ministers also visited the Military Lyceum named after Heydar Aliyev in Nakhchivan.
The guests got acquainted with the military-educational institution. It was stressed that the conditions that meet modern requirements were created in the Lyceum due to the high attention and care of the state leadership. Along with the education of cadets, their social protection and military-patriotic education are also in the spotlight here.

The ministers have met with the teaching staff and cadets and got acquainted with the conditions created in the academic building and residence hall.