We and Heydar Aliyev together... - Interview 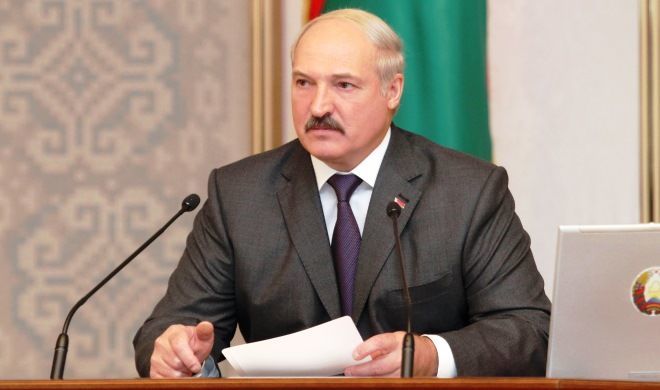 Lukashenko talked on current level of cooperation between Azerbaijan and Belarus.

Axar.az reports that Belorussian President talked about cooperation in his interview with Trend news agency.

Azerbaijan is one of important, reliable political and economic partners of the Republic of Belarus.

The Belarus-Azerbaijan bilateral relations are time-tested. The relations were brought to the level of strategic partnership, which is based on openness, trust, friendship and mutual assistance.

We remember that the Azerbaijani leadership rendered us the timely assistance, when Belarus was in a difficult situation. A significant contribution to the development of the Belarus-Azerbaijan cooperation was made by Heydar Aliyev, with whom we laid a solid foundation for bilateral cooperation.

The current high level of the Belarus-Azerbaijan relations would have been impossible without adequate attention paid by Azerbaijani incumbent President Ilham Aliyev.

Once we together correctly determined the priorities of bilateral cooperation, and we implement our agreements which bring benefits to both Belarus and Azerbaijan.

As you know, we have established friendly, trust relations with President Ilham Aliyev. Of course, this transmits to all interstate relations. There is a good practice of holding regular meetings at the highest level, the established interaction between the two countries’ governments, parliaments, key ministries and agencies, business circles, is great.

The cooperation is being expanded in the fields of industry and services. The bilateral cooperation has been intensified in the investment field.

Azerbaijani business comes to us with projects on creating logistics and business centers, hotels and catering facilities, infrastructure.

The investors are greatly interested in such areas as construction, food industry, machine building, transport, tourism, banking and insurance services.

The meetings of the working group on innovative projects, as well as business forums are regularly held through the Ministry of Communications and Informatization of the Republic of Belarus and the Ministry of Communications and High Technologies of Azerbaijan. Constant work in this direction allowed building up a system of promotions of innovations - from project development to their practical implementation.

Cooperation in other areas is also in full swing. Scholars from both states have established long-term contacts. They implement joint research projects. Every year, leading Belarusian and Azerbaijani artists share guest performances, which enjoy unchanging success.

I am sure the current system of political, trade, economic, educational, cultural and other ties between our countries is an important factor of dynamic development of bilateral strategic partnership. I would like to repeat what I have already said about cooperation with Azerbaijan: “God grant such a relationship with every country.”

On prospects of interstate cooperation

This is what the two presidents’ efforts are mainly aimed at. There are quite good results. For example, about 8,000 ‘Belarus’ tractors and more than 3,500 MAZ branded equipment have been assembled at the Ganja automobile plant since 2007. In 2015, this Azerbaijani enterprise was the largest plant to assemble Belarusian tractors outside the Eurasian Economic Union.

There can and should be considerably more such examples, beneficial for both our countries. We are ready to actively participate in projects beyond conventional trade. This includes creation of joint ventures in various economic sectors based on innovative ideas and intensification of cooperation in agriculture, production of consumer goods, transportation and information technologies development.

There is mutual interest to work together in standardization, development of digital television, modernization of telecommunication networks and equipment, in information security and traffic exchange.

Given the existing groundwork and expertise of the Belarusian side in the nuclear research, there are prospects for joint activities in development of nuclear power engineering, which is being mastered by Azerbaijan.

One of the goals of our cooperation is to sell goods, produced by joint efforts, to other countries. By the way, Azerbaijan can play a significant role in promotion of these products in the markets of the Caucasus region, as well as in the Middle East.

The Belarusian side is certainly interested to participate in implementation of these plans. We have considerable experience in the support of infrastructure projects in foreign markets.

This includes construction services, commissioning of turnkey facilities, and supply of machinery and equipment. I think our entrepreneurs will be on the same wavelength with the Azerbaijani clients. As you know, Belarus is open for cooperation in all fields of mutual interest and is ready to realize any idea serving to strengthening of our countries and increasing living standards of citizens.

Today, it cannot be definitely said how has the Eurasian Economic Union (EEU), which began to operate almost two years ago, affected the arrival of Azerbaijani investors in Belarus. Here are the figures: in 2015 the investments by Azerbaijani partners to Belarus amounted to about $5.5 million. This is just slightly more than 80 percent of the figure for 2014 when the EEU was not formed yet.

In January-June 2016, these revenues exceeded $4 million, which is by half more than in the same period of 2015. Judge for yourselves. It is indisputable that after the coming into force of the Treaty on the Eurasian Economic Union, Azerbaijani businessmen, who have invested in the Belarusian economy with the whole range of their products, have direct access to the market of EEU countries.

What is the peculiarity of this market? One of the Union’s main goals was to ensure freedom of movement of goods, services, capital and labor force. Moreover, this is a single customs territory with an appropriate tariff policy. There are equal management conditions for members of the organization, as well as single rules of technical regulation, sanitary, veterinary and phytosanitary norms.

It also should be noted that quite attractive investment and tax climate was created in Belarus. A number of preferential regimes are effective that can be very useful for foreign companies, including in terms of their tax planning and optimization.

I mean the preferential conditions for economic management when placing the business in free economic zones, High Technologies Park and Great Stone Industrial Park, which we are creating together with China.

Any company can take additional benefits in the form of maximum reduction of investment costs and tax burden, by expanding activities in small and medium towns of Belarus.

On cooperation in energy sphere

This is one of the priority directions of bilateral cooperation, including in the context of diversification of energy sources for Belarus. We already have positive experience of working together in this area. Our country has had a developed petrochemical complex since Soviet period. These enterprises are characterized by high technological level, the deepness of oil processing and quality of oil products that are in line with international standards.

Over 70 percent of the Belarusian oil and chemical products are sold in foreign markets. Therefore, processing Azerbaijani oil in our plants is of great interest to us.

By organizing this process, we will be able to significantly expand cooperation in the chemical industry. In particular, we can carry out mutual supplies of raw materials and establish close cooperation between the chemical enterprises of Belarus and Azerbaijan.

Cooperation in the use of renewable energy sources is also promising. The range of mutually beneficial work can be very wide – from holding joint researches to creation of modern highly efficient energy facilities.

We are interested in it. In present conditions the movement of goods between the states is a rather complex process, which involves rendering a wide range of services.

In this regard, Belarus’ joining the International Trans-Caspian Transport Corridor would be logical. After all, our country has high transit potential due to its favorable geographical location, developed logistics infrastructure and availability of skilled work force.

It would be more correct to say that Belarus has not “turned into”, but gained a peacekeeper status thanks to its balanced responsible policy that fully serves both the national interests and strengthening of stability in Europe. Nowadays, this indisputable fact is recognized even by our opponents. Minsk is rightfully recognized by international community as the most convenient platform for settlement of the situation in the eastern Ukraine.

With full responsibility I declare: we are ready to further ensure meetings in different formats in the capital of Belarus at different levels to reconcile any sides which are in conflict with each other, but provided that they appeal to us with the corresponding request.

This also concerns the Nagorno-Karabakh issue. I will be sincere: just like the Belarusians didn’t remain indifferent to the events in the city of Donbass [Ukraine], our heart is aching for Karabakh in exactly the same way. This is no coincidence. All of us – Ukrainians, Russian, Belarusians, Armenians and Azerbaijanis, representatives of many other nations – come from a great country, one united family called the Soviet Union. Therefore, we will make every effort for the sake of peace, quiet life for people in any part of the world.

Regarding the Nagorno-Karabakh conflict, our position remains unchanged: the issue can be solved only through negotiations and in accordance with principles of international law. As a member of the OSCE Minsk Group, Belarus is ready to provide the necessary assistance to the sides of the conflict to find a peaceful solution. We believe there is no greater value for people than peace and tranquility in their native land.