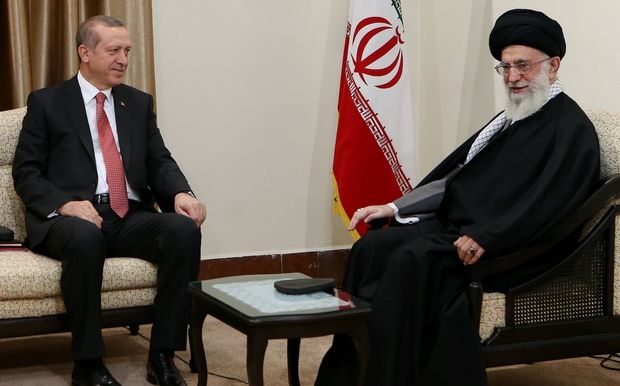 New York Times newspaper has published an analysis on relations of Turkey and Iran.

Today’s competition between Turkey and Iran is the latest iteration of an old power game: a struggle their progenitors, the Byzantine and Persian empires, started over the control of Mesopotamia — today’s Iraq and Syria. While the rivalry outlived their transformation from empires to nation-states, they have managed to keep the peace between themselves for nearly 200 years.

Yet Turkey and Iran are now on a collision course, mostly because of their involvement as the region’s major Sunni and Shiite powers in the deepening sectarian conflicts in Iraq and Syria. Their inability to accommodate each other has the potential to undermine or even undo the strong ties they have developed over the past two decades, as their economies became increasingly intertwined.

How the two countries choose to deploy their power and whether they can overcome their differences are vitally important to determining the future of the Middle East. Left unchecked, the present dynamics point toward greater bloodshed, growing instability and greater risks of direct — even if inadvertent — military confrontation.

Turkey’s military involvement in Syria and Iraq is partly a response to the perception that Iran is increasingly encroaching on its historic sphere of influence, especially in and around the Aleppo and Mosul battlefields close to its southern border. It is also an effort to prevent the Syrian Kurdish Democratic Union Party, or P.Y.D., which is affiliated with Turkey’s archnemesis the Kurdistan Workers’ Party, or P.K.K., to gain more territory.

Syrian rebels supported by the Turkish Army are currently advancing southward, having pushed the Islamic State out of the towns of Jarablous, al-Rai and Dabiq near the Turkish border between August and October. They are now at the gates of the town of al-Bab, and the stage is set for confrontation. The strategically important city is held by the Islamic State but coveted by others: the United States-backed P.Y.D. closing in from the east, and the Syrian Army and Iranian-allied forces from the south. Already, some officials have alleged that an Iranian-made drone was involved in killing four Turkish soldiers in an air attack near al-Bab on Nov. 24.

Friction between the two countries and their proxies is rising alarmingly at a time that mutual trust has reached a nadir.

Tehran interprets Turkey’s Syria policy as primarily a product of a neo-Ottoman ambition to regain clout and empower pro-Turkey Sunnis in territories ruled by its progenitor. “What changed in Syria” after the civil war began “was neither the government’s nature nor Iran’s ties with it, but Turkish ambitions,” an Iranian national security official told me. Moreover, Iran blames Turkey for not stemming the flow of Syria-bound jihadists through Turkish territory and for giving them logistical and financial support.

In the same vein, officials in Ankara contend that Iran seeks to resuscitate the Shiite version of the ancient Persian Empire. In March 2015, President Recep Tayyip Erdogan of Turkey accused Iran of fighting the Islamic State in Iraq only to replace it. Turkey also says that Iran’s mobilization of Shiite militias from Lebanon, Iraq and Afghanistan to protect the rule of a minority sect, the Alawites, over a majority-Sunni population in Syria has worsened sectarian tensions, giving Sunni extremists a potent recruitment tool.

In trading accusations, each decries the other’s refusal to acknowledge its view of reality, while ignoring the fact that each has acted in ways for which it faults the other — including deploying military forces to wars beyond their borders and supporting militias, both aimed at controlling whatever emerges from the debris of today’s turmoil in Syria and Iraq.

Both countries have attempted to build on shared interests — defeating or at least marginalizing the Islamic State and curbing the rise of Syrian Kurds seeking autonomy — but deep suspicions about the other’s ambitions to benefit from the chaos have stopped them from reaching an arrangement that could reduce tensions.

To reverse course and avoid worse, Turkey and Iran need to overcome mistrust and go beyond merely managing differences — with the risks of accidents, miscalculations and miscommunications this entails — and, for once, frankly acknowledge each other’s core interests and security concerns.

To this end, they need to establish a channel for continuous high-level negotiations over Iraq and Syria. The pace of such meetings to date has been problematic: periodic senior-level encounters lasting one or two days, followed by relatively long periods of diplomatic vacuum often filled with the escalation of proxy wars and one-upmanship. Mr. Erdogan and Supreme Leader Ali Khamenei of Iran should designate personal representatives with the authority to manage the diplomatic channel.

Beyond this, the governments should also find ways to increase cooperation and trust, like sharing intelligence to better fight common foes and avoid accidental clashes, and coordinating steps that could defuse tensions where their spheres of influence collide. As a first step, in northern Iraq, Iran might offer to rein in Shiite militias deployed in Nineveh Province in return for Turkey’s agreeing to withdraw its tanks and other heavy weapons from the area. The United States and Russia, which have strong military ties with Turkey and Iran respectively, should support such steps, despite their differences.

Among the countries involved in the ever-worsening proxy wars in Iraq and Syria, no two are more suited to seeking mutual accommodation than Turkey and Iran. As mature states with a long history of peaceful relations, they should not allow themselves to be sucked further into an uncertain future. Only by finding common ground can they contribute to a more stable and secure region. The alternative is even greater disorder and suffering.