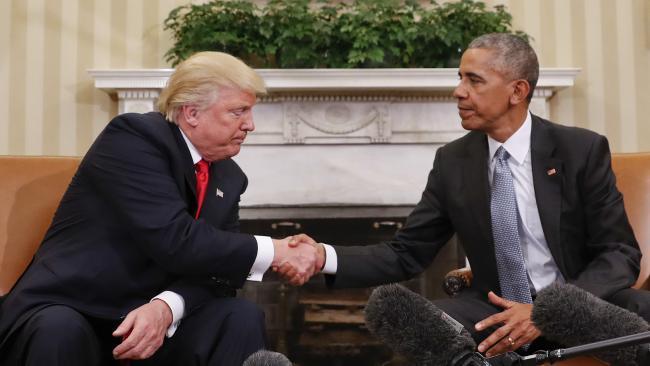 President Donald Trump said that former President Barack Obama left “a beautiful letter” that was “so well written” in the desk drawer in the Oval Office.

“I doubt too many of them were written in this matter,” Trump told ABC News in an interview, referencing the tradition of presidents writing letters to their successors.

“In fact I called him and thanked him for the thought that was put into that letter.”

Trump declined to let ABC News host David Muir read the letter, but Muir pointed out that the letter was longer than notes written by previous presidents.

“It was long. It was complex. It was thoughtful. And it took time to do it, and I appreciated it and I called him and thanked him,” Trump said.

While Trump said nothing in the letter surprised him he pointed to one section of Obama’s letter that he thought was “very interesting.”

“He said, ‘You know if I thought your healthcare plan was going to be better’ than his plan, ObamaCare, ‘I would support it.’ And I believe he would,” said Trump.

Trump also noted that during the car ride from Capitol Hill to the White House with the Obamas, he pointed out to President Obama that the ride was "weird" after the vitriol of the presidential campaign, during which the Obamas campaigned hard for Hillary Clinton.

"We didn't discuss the negative, we only discussed the future and the positive. And we really get along well. Now again, he may say differently, but I don't think he would," he said.

And Trump recalled a moment of "warmth," captured in a photo as the new president and first lady saw Barack and Michelle Obama off on Executive One after the inauguration.

"The scene of that great machine turning on and lifting off, it was really something special," he said.