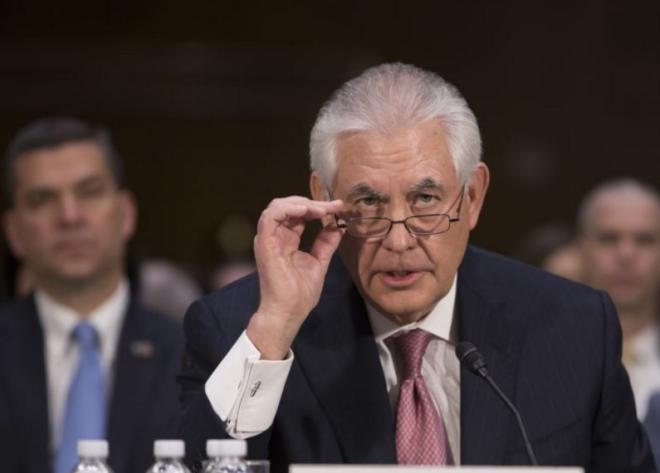 China is likely to express its anger at being told to rein in nuclear-armed North Korea when U.S. Secretary of State Rex Tillerson arrives in Beijing on Saturday, his first visit to the country since taking office last month.

Beijing is expected to call on Washington to share responsibility in lessening tensions in the region, while strongly opposing this month's deployment of a sophisticated U.S. missile defense system in South Korea.

Tillerson issued the Trump administration's starkest warning yet to North Korea on Friday, saying that a military response would be "on the table" if Pyongyang took action to threaten South Korean and U.S. forces.

He was speaking in South Korea, the second leg of an Asia visit that has also taken him to Japan.

In Beijing, he may raise the prospect of imposing "secondary sanctions" on Chinese banks and other firms doing business with North Korea in defiance of sanctions, a U.S. official told Reuters in Washington, speaking on condition of anonymity.

U.S. President Donald Trump said in a tweet on Friday that North Korea was "behaving very badly" and accused China, Pyongyang's neighbor and only major ally, of doing little to resolve the crisis over the North's weapons programs.

Tillerson however is also expected to firm up a trip by Chinese President Xi Jinping to the United States next month for his first summit with Trump, and could choose to tone down any differences between the world's largest economies, at least for now.

A former oil executive with no prior diplomatic experience, Tillerson will meet China's two top diplomats on Saturday and Xi on Sunday.

On Friday, Chinese Foreign Ministry spokeswoman Hua Chunying reiterated that talks were the best way to resolve the problems of the Korean peninsula.

"As a close neighbor of the peninsula, China has even more reason than any other country to care about the situation," she told a briefing.

North Korea has conducted two nuclear tests and a series of missile launches since the beginning of last year.

Last week, it launched four more ballistic missiles and is working to develop nuclear-tipped missiles that can reach the United States.