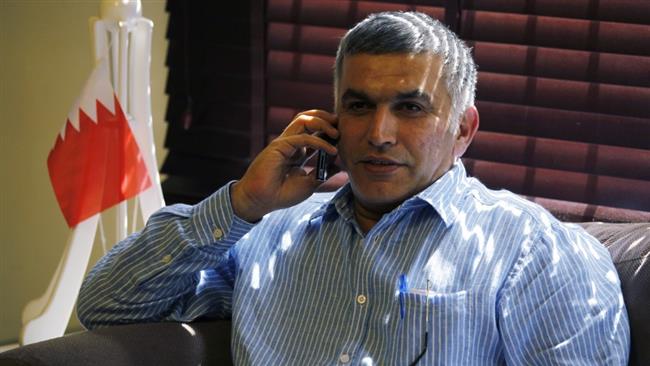 A Bahraini court has postponed until May 17 the trial of prominent human rights activist Nabeel Rajab, who has been behind bars for criticizing the Al Khalifah regime’s involvement in the Saudi-led military campaign against Yemen.

Bahrain's Supreme Criminal Court, presided over by Judge Ibrahim al-Zayed, took the decision against Rajab, the founder of the Bahrain Center for Human Rights, on Wednesday.

The 53-year-old human rights activist, who is accused of “spreading false news and insulting a foreign state and the Bahraini Ministry of Interior,” could be jailed for 15 years if found guilty.

On November 24, the rights campaigner was taken to hospital from prison due to heart problems after being held in solitary confinement for three months. Reports suggest that he has been subjected to harassment in jail.

Human Rights Watchdog has called for Rajab's immediate release, saying the charges against him "inherently violate the right to free expression."

Anti-regime protesters have held demonstrations in Bahrain on an almost daily basis ever since a popular uprising began in the kingdom on February 14, 2011.

They are demanding that the Al Khalifah dynasty relinquish power and a just system representing all Bahrainis be established.

On March 14, 2011, troops from Saudi Arabia and the United Arab Emirates were deployed to Bahrain to assist Manama in its crackdown on peaceful protesters.

Scores of people have lost their lives and hundreds of others have sustained injuries or been arrested.