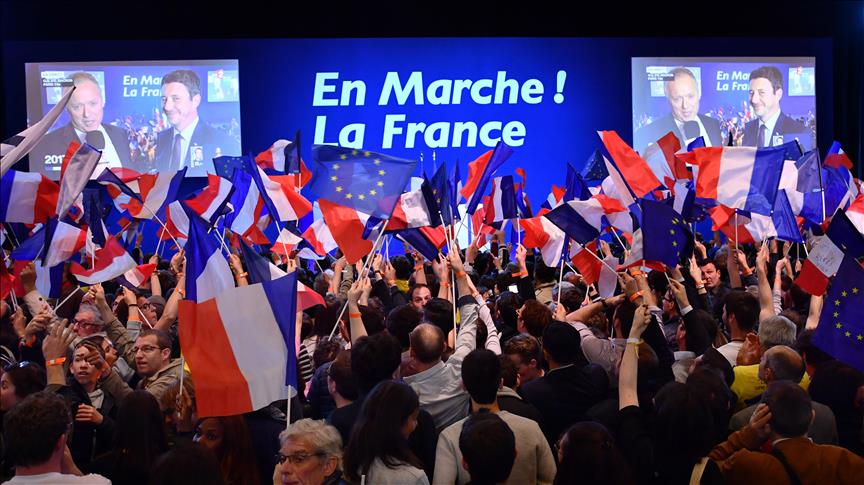 Campaigning for next month's critical parliamentary elections in France began on Monday amid a crisis for mainstream parties and the rise of a centrist movement aligned to President Emmanuel Macron.

Macron’s La Republique En Marche! (LREM, The Republic on the Move) needs to win 290 seats in order to secure a majority so the new president can carry out his reforms.

The campaign for the first round ends on June 9 at midnight.

The LREM movement has already revealed a list of 526 candidates - 266 women, 260 men -- many of whom have never held elected office.

The two-round legislative elections are scheduled to take place on June 11 and June 18 to elect 577 members of the National Assembly, France’s lower and more powerful house of parliament.

An OpinionWay poll published recently showed LREM securing the support of 27 percent of the electorate and winning a majority of the seats.

The center-right Republicains and the National Front are both projected to receive around 20 percent.

In an interview published on Monday in the Paris Normandie newspaper, Prime Minister Edouard Philippe said Macron "wants to build around his program a majority of progress that is not trapped in the right/left divisions which fossilized political life for years".

Philippe, originally from Les Republicains, was kicked out of the party along with Bruno Le Maire and Gerald Darmanin after the three were respectively named as prime minister, economy minister and budget minister by Macron.

The new premier warned if LREM did not win a majority in June, the country would return to era of "bargaining between parties".

"I really do not want it, because it is not in the interest of France and it would be the return to a certain spirit of the Fourth Republic," Philippe added.

Jean-Christophe Cambadelis, the current secretary-general of the Socialists, told France Inter radio on Monday that his party will work in the coming weeks to restructure itself.

Reforms might include a change of name as well its headquarters, he said.

As for Les Republicains, Jean-Francois Cope -- a former head of the party -- said the group should be "revised from top to bottom".

"In the aftermath of June 18, whatever happens, we will have to reorganize everything... to make the different voices heard better," Cope, a sitting lawmaker, told the France 2 broadcaster.

"We must change, we must open up, there must be different sensitivities, different trends," he added.

The outcome of the elections will play a great role in shaping Macron's five-year term and lead to a major shift in the French political landscape.