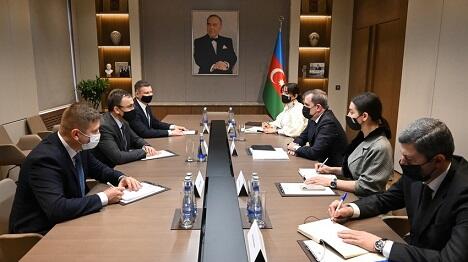 Axar.az reports that according to the Foreign Ministry, the Minister noted with satisfaction the current state of friendly relations and strategic partnership between the two countries.

It was noted that there are cooperation and mutual understanding between our countries, as well as on multilateral platforms. Bayramov said the exchange of visits between the two countries made a positive contribution to the development of relations, noting the visit of Ukrainian President Vladimir Zelensky to Azerbaijan in 2019.

The Minister also briefed the Ukrainian Deputy Foreign Minister on the current situation in the region, the implementation of trilateral statements, the new security situation in the region, and opportunities for cooperation. Bodnar thanked for the warm reception, conveyed the greetings of Foreign Minister Dmitry Kuleba and said that he had invited his counterpart Jeyhun Bayramov to Ukraine.

It was noted that there are great prospects for the development of bilateral relations, and the importance of the work of the Intergovernmental Commission on Economic Cooperation. The sides also exchanged views on cooperation within international organizations, including the BSEC.