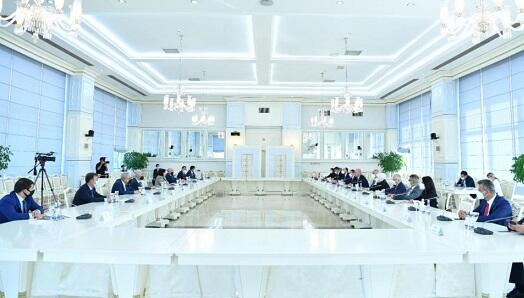 Axar.az reports that Madame Chair welcomed the guests cordially, stressing that Azerbaijan and Turkey are the friendly and fraternal countries and that our nations have always demonstrated mutual supportiveness in the most difficult spans of their histories. The relations of friendship, brotherhood and strategic partnership between Azerbaijan and Turkey are based on the ‘one nation – two states’ philosophy voiced by the Great Leader Heydar Aliyev, according to Mrs Gafarova, the Press and Public Relations Department of the Milli Majlis told.

Built on a foundation of historical amity and strategic partnership, our connexions are evolving today with the high-level relationship between the heads of state and their regular contacts serving the cause of the connexions’ yet further expansion and development, Sahiba Gafarova continued. This was proven beyond doubt by the invariable and unequivocal support of the President of Azerbaijan for the brotherly state at various international events as well as by the Turkish State and its President having become the moral and political rock for our country during the Patriotic War.

Touching also on the relations between the NAP and the AKP, the ruling parties of the two states, Madame Speaker noted that the bonds between the New Azerbaijan Party and the Justice and Development Party, too, are contributing across the board to the progress of the interaction between the two countries.

The association of the legislative bodies of Azerbaijan and Turkey are advancing constantly as well, as Sahiba Gafarova emphasised before supplying the guests with ample information about the workings of the Milli Majlis and about the reforms implemented in the new political configuration in the parliament of our country.

Thanking for the kind welcome, First Deputy Chairman of the Justice and Development Party of Turkey Numan Kurtulmush witnessed the satisfaction, his own and that of his delegation, with the visit to Azerbaijan and with the meetings held here. The guest then offered his congratulations on the historic Victory of Azerbaijan in the 44-day Patriotic War. The international institutions that had been blinking at the Armenian occupation for three decades had taken no tangible steps to solve the problem. Azerbaijan had freed its lands from the occupation by Armenia on its own only, it was pointed out. That Victory marked the triumph of not only the Azerbaijanis but also of their Turkish friends.

Mr Kurtulmush mentioned the joint projects under way as he spoke of the ties between the party that he represents and the NAP.

Other matters of shared interest were talked over during the meeting as well.