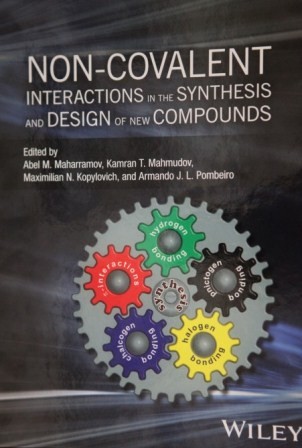 The US-based Wiley Publishers specialized in the academic editions has released the book by Azerbaijani scientists. The book titled “Non-covalent Interactions in the Synthesis and Design of New Compounds” contains 25 chapters and 465 pages. Founded in 1807, the Wiley Publishers has published the works by over 250 Noble Prize winners so far and it is the first book by Azerbaijani scholars ever published in this famous publishing house.

Published under the general editorship of Academician Abel Maharramov, rector of the Baku State University, the book aims to overview the role of non-covalent interactions, such as hydrogen and halogen bonding, π-π, π-anion and electrostatic interactions, hydrophobic effects and van der Waals forces in the synthesis of organic and inorganic compounds, as well as in design of new crystals and function materials.

The proposed book should allow to combine, in a systematic way, recent advances on the application of non-covalent interactions in synthesis and design of new compounds and functional materials with significance in Inorganic, Organic, Coordination, Organometallic, Pharmaceutical, Biological and Material Chemistries.

Therefore, it should present a multi- and interdisciplinary character assuring a rather broad scope. In the scientific literature, the novelty was named as “spider effect” which was accepted by the world academic circles.