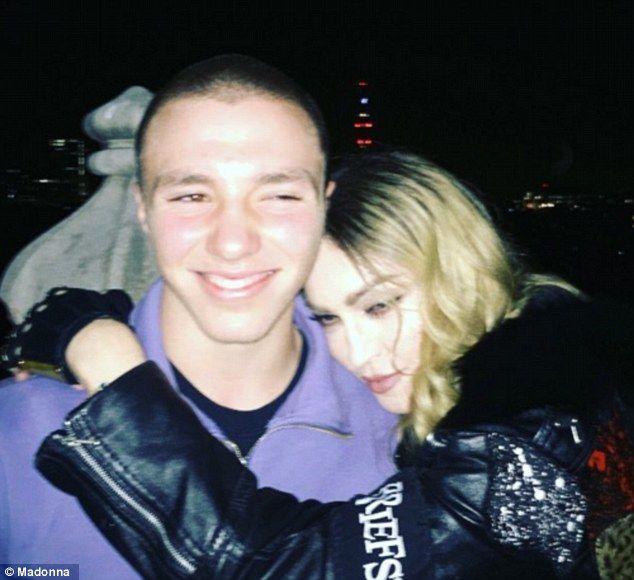 Madonna has spoken out in support of her teenage son Rocco Ritchie after he was arrested for drug possession.

The musician says she is supporting her 16-year-old son after the troubled teen was arrested for possession of marijuana near his London home. Madonna released a statement today calling the arrest 'a family matter.' She said: 'I love my son very much. I will do whatever I can to give him the support that he needs, and I ask that you respect our privacy at this time.'

Rocco's father Guy Ritchie is yet to comment on the arrest. However, he was seen looking stern as he stepped out in Primrose Hill the morning after the news broke. Sources told the Sun that Rocco was arrested after neighbours in the exclusive Primrose Hill area of London reported the teen to police. Officers reportedly saw him tossing something away as they approached him in Steeles Mews North, Camden. Rocco was the subject of a long and turbulent custody dispute between Madonna and ex-husband Guy that began at the start of 2016.

Guy's lawyers argued Rocco was settled in school in London and, in September, he won the nine month battle over where their son should live. The Sherlock Holmes director reached a settlement with the pop star and it was agreed the teenager would continue to live in London. The terms of the custody agreement remain confidential, but it is understood Rocco is schooled in London, with regular visits from his mother.

After a tumultuous year, Madonna - who is also mother to Lourdes, David Banda and Mercy - has painstakingly repaired relations with her eldest son. He reportedly abandoned her tour last December amid reports that her behaviour 'pushed him over the edge'. Website TMZ claimed that Madonna thought Guy 'had poisoned her son against her' and, 'as the disciplinarian [parent], she felt guy was way too permissive'. He moved to the UK to be with his 'less strict' father, reports at the time suggested, and his new wife Jacqui, along with their three young children - Rocco's step-siblings - after his mother took away his phone.

Rocco was arrested on September 28 in Camden. A Metropolitan Police spokesman said: 'A 16-year-old youth has been arrested for possession of cannabis. 'The arrest follows a stop and search by officers from Camden borough at around 5.15pm on Wednesday, September 28 at Steeles Mews North. 'The youth was taken to a north London police station. He was subsequently bailed and dealt with by Camden borough's Youth Offending Team. 'He was dealt with by way of Triage, which uses multiple strands to engage and educate young people in order to prevent re-offending.'