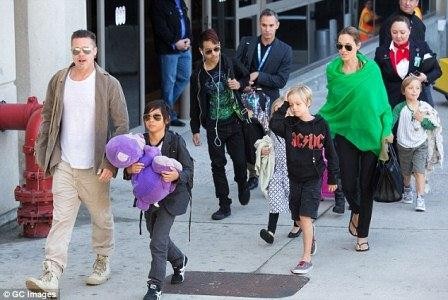 Angelina Jolie will continue to have sole custody of her six children with Brad Pitt in an agreement reached by the actors, a representative for the actress said Monday.

The agreement calls for the former couple's six children, who range in ages from eight to 15, to continue to have 'therapeutic visits' with Pitt.

Jolie filed for divorce in September, days after Pitt was involved in a disturbance during a private flight with his family. She cited irreconcilable differences as the reason for the breakup, and an attorney said at the time she filed for divorce 'for the health of the family.'

Monday's statement said the agreement was reached more than a week ago in consultation with childcare professionals. It says no further details could be provided, and it makes no mention of an investigation by child welfare workers into the plane incident.

Pitt and Jolie Pitt reached a temporary custody agreement in late September that included at least some of the same terms — visitation with his children and both sides agreeing to meetings with therapists.

'In accordance with this agreement,' the statement from Jolie's rep claimed, 'the six children will stay in their mother's custody, and the children will continue therapeutic visits with their father. This has been determined by childcare professionals to be in the children's best interest.'

'We are not in a position to discuss the details,' the rep continued. 'We hope now that it is clear that the events which led to the dissolution filing involved minor children and their wellbeing, there will be understanding of the sensitivity of the family situation.'

'We believe that all sides are committed to healing the family and ask for your consideration during this difficult time,' Monday's statement concluded.

While Entertainment Tonight reports the agreement between the former couple is 'indefinite' and is separate from the voluntary safety plan implemented by the Department of Child and Family Services.

A source told ET the agreement has 'no time frame to it, it is in place until they decide to make a change'.
Other reports emerged on Monday claiming the agreement was temporary and not legally binding.

TMZ claims the custody arrangement is only temporary until the Department of Children and Family Services closes its investigation.

The website reports that the agreement is simply an extension of a prior arrangement reached by the estranged couple with Pitt having monitored visitations with the children under the guidance of a therapist as the DCFS continues its investigation.

According to TMZ, the agreement was extended last week but is not a settlement nor does it bear on Pitt's filing for joint custody.

Reps for both Angelina Jolie and Brad Pitt have been contacted by Daily Mail.

The news comes after Pitt, 52, asked for joint physical and legal custody of the six children he shares with Jolie on Friday, which appears to conflict with the statement released by Jolie's rep.

Papers seen by DailyMail.com were filed in the Superior Court of California, Los Angeles, on Friday.
Pitt states on the document that he is ending his marriage with Jolie over 'irreconcilable differences'.
He also lists the same separation date, September 15.

He then mentions his children - Maddox, 15, Pax, 12, Zahara, 11, Shiloh, 10, and eight-year-old twins Knox, and Vivienne - and puts down that he is seeking joint custody.

Jolie filed for divorce in a Los Angeles court September 19.

In the filing, she said she separated from her husband on September 15 – a day after the couple and son Maddox were involved in an alleged altercation on their private plane.

The actor was accused of physically attacking Maddox while drunk.

Child services in Los Angeles have launched an investigation into what happened.

The FBI has said it is gathering information before deciding whether to launch a federal probe into the allegations.

They interviewed Jolie for four hours after the alleged altercation, according to reports.

The actor has denied the claims.

Reports initially suggested that Pitt was seeking joint custody, and wanted to avoid a court battle.

A source recently told People that the pair were still trying to iron out differences during their acrimonious split.
'They are still working on issues that they can't agree on. It seems their issues still involve the kids,' the insider close to the family said.

'Brad and Angie haven't had any contact, and it's all being worked out via their teams,' said the family source recently. 'It's just a sad situation.'

Pitt and Jolie were together for 12 years after becoming close while filming 2005's 'Mr. & Mrs. Smith.'
When they weren't acting, the couple were seen as devoted parents and global philanthropists, creating a joint foundation in 2006.