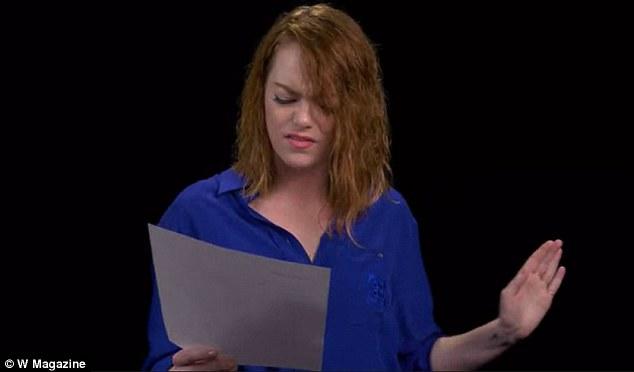 With the inauguration just over a week away, some are starting to feel serious anxiety - including many Hollywood actors.

But with the optimistic speech of President Barack Obama in Chicago on Tuesday night, W magazine and Conde Nast Entertainment are now following that lead with a video featuring plenty of a-list celebrities enthusiastically declaring: 'I will survive!'

The clip sees the star-studded cast participate in a 'lyrical improv' reading of the 1978 Gloria Gaynor disco classic, with many of the actors taking on the challenge with fervor.

Sometimes dead serious, sometimes fun and silly, the performances combine to make one seriously entertaining rendition of the tune.

The actors were gathered from W's annual Best Performances portfolio as performers from this year's most critically acclaimed films including La La Land, Moonlight and even Rogue One.

'This is going to be interesting,' actor Andrew Garfield tells the filmmakers before starting his reading. 'It may get too real.'

The star chosen to belt out the famous first line of the song is Star Trek actor Chris Pine, followed by Hailee Steinfeld, who sings the second line with an appropriately 'petrified' expression.

Some of the actors participating in the video, like Natalie Portman, opt to simply read the words, while others channel their inner soul singer.

Emma Stone and Amy Adams both get right into their lines, dance moves and all. 'You have to march!' Emma declares in the middle of her line.

Other stars who pop on screen throughout the video to read lyrics include Matthew McConaughey, Felicity Jones and Dev Patel.

But the real star of the show is Empire star Taraji P. Henson, who waves an indignant finger at the camera at one point before taking it all home with a wail and dancing off into the background.

The video comes from a compilation of interviews W had done with the stars, including one with Emma Stone where she revealed that she required extensive dental work after sucking her thumb until she was 11.