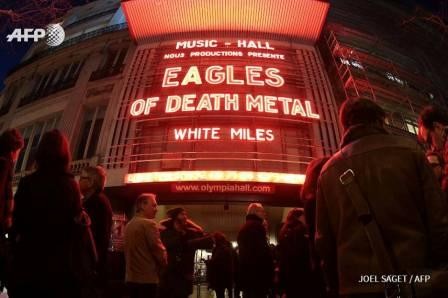 In a concert that may go down in rock history, the US band “Eagles of Death Metal” did their damnedest to exorcise the horror of the Bataclan massacre as they played in front of its survivors in Paris on Tuesday.

Despite fears the concert could bring back the trauma of November's slaughter in which 90 people died, the group whipped the crowd into a frenzy of joy, with fans embracing each other in tears at the end.

Eagles’s frontman Jesse Hughes bounded off the stage to hug a survivor in her wheelchair, as the night wore on and the emotion grew.

The ultimate rock showman, who smashed his guitar on stage at one point to wild applause, had choked up the night before as he told AFP how he feared "falling to pieces on stage".

In the event, he turned in a bravura performance that many fans hailed as his best.

Deafening cheers and applause rang out as the group began their set, with many survivors -- including the band -- hoping the gig would help them turn the page on their ordeal.

Rich in symbolism, the Eagles appeared to the playback of an old song "Paris s'eveille," "Paris Wakes Up," a portrait of a city about to begin a new day by French singer Jacques Dutronc.

The band then tore into a favorite song, "I Only Want You," but stopped halfway.

"Let's take a moment to remember, and then we will get back to the fun," said drummer for the night Josh Homme, Hughes' best friend and lead singer of “Queens of the Stone Age”.

“Eagles of Death Metal” was playing at the Bataclan concert hall on November 13 when jihadists opened fire on defenseless fans.

The assault was the bloodiest in a string of attacks in central Paris and the national stadium that left 130 dead and 350 injured many grievously.