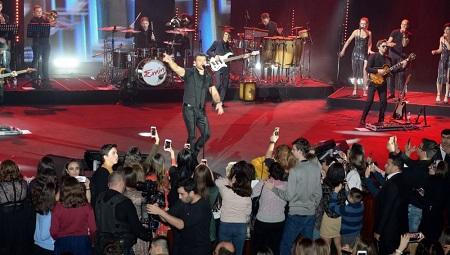 Axar.az informs that, the concert was attended by MPs from Ganja, members of the public and guests of the city.

Emin Agalarov performed his famous hits in front of the audience.

The concert was greeted with enthusiasm and applause from the residents of Ganja.

Emin Agalarov started his professional music career in 2006. His first album, STILL, was released that year. 70,000 copies of this disc were sold in Russia and 30,000 copies in the CIS countries. In the three years following the debut album's success, Emin released three more English-language discs: Incredible (2007), Obsession (2008) and Devotion (2009). Each of them was accompanied by live concerts in Moscow and Baku.

Since then, his various albums have been released over the years. The albums were met with interest in different countries around the world.