US comedy star dies at 98 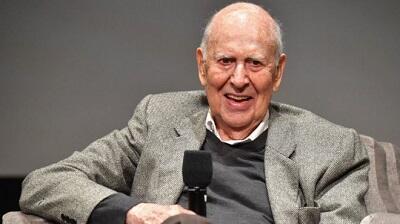 Carl Reiner, who helped create The Dick Van Dyke Show and acted in films like Ocean's Eleven, has died aged 98.

The prolific writer, comedian, director and actor also directed several films including Steve Martin vehicles The Jerk (1979) and All of Me (1984).

He was in 2001's Ocean's Eleven and its two sequels as conman Saul Bloom, and had a double act with Mel Brooks.

He died of natural causes on Monday at his home in Beverly Hills, his assistant Judy Nagy confirmed.

He was a close friend of fellow sketchwriter Brooks, and the pair found a new audience with their 2000 Year Old Man routines, which spawned books and an animated TV special.

Reiner's agent recently posted a picture of the pair supporting the Black Lives Matter movement along with Reiner's daughter.