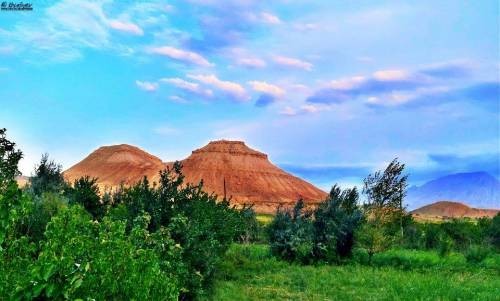 Azerbaijan is a wonderful country in the South Caucasus with ancient history, interesting traditions, picturesque nature and hospitable people. The country is divided into several regions each of which has preserved its unique tradition and culture.

Ordubad, also known as the pearl of the Nakhchivan Autonomous Republic, is one of the most beautiful and ancient cities of Azerbaijan.

Scientists say the first settlement in Ordubad, situated in the south-west of the Lesser Caucasus, was established in 5-6 centuries B.C., however, the city is known since the 12th century. Architectural buildings of the city have preserved their antiquity.

The region is also famous for its climate, monuments, national and architectural landmarks, as well as for its unique cuisine, which makes this land of particular interest to tourists.

Flowering and smelling gardens of Ordubad, mountains and springs have always attracted the attention of travelers. The city is also famous for its chenars, with the largest being of 18 meter-diameters.

Ordubad is considered as the country’s flower trade center, and it exports fruits and spices abroad. Fruits of Ordubad are very tasty thanks to the region`s unique climate. Probably many have tasted dried fruits of Ordubad and know their flavor.

Perhaps the most famous gift of Ordubad’s orchards is peach. This juicy and delicious fruit is also distinguished by its bright color and "rosy cheeks". To pick the peach yourself, it is necessary to visit these places in July. Ordubad peach is also popular in dried form, which is considered to be very useful for the gastrointestinal tract.

In winter, dried peach and other dried fruits are served with tea. During summer months, it is worth to see how various fruits dry on the roofs of Ordubad houses.

I would especially like to mention lemon of Ordubad, because citrus fruits have unique peculiarities. Ordubad lemon does not have astringent taste, and does not have a strong effect on blood pressure.

Lemons are grown almost in every yard in Ordubad. Representative of Executive Authorities Hikmat Nasirov says Ordubad lemons have been home grown from ancient times. “Lemon trees are planted in pots here. The pots should be neither in very sunny nor in very shadowy place. The trees have to be irrigated every day in summer, and once a week in winter. Lemon trees should not be kept in open air in winter,” he told Azertac.

“Lemon trees here are usually one meter in height. If irrigated normally one tree can give up to approximately 15 to 30 lemons. The price of lemon is expensive in the markets, with one costing around 5 manats ($3). Big lemons may even cost 15 manats ($9).”

Ordubad is the best place to not only have a rest in nature, but also to change the taste of your mouth. While tasting food here, do not forget to try famous unusual milk dish Gurut, and scrambled egg, considering the most famous dish of the region.

Ordubad fried eggs may sound simple, but it is very difficult to make it. This is not ordinary fried eggs we are used to cook. Imagine that you need two kilograms of butter, 18 eggs and juice from a cup of honey to make this dish. One of the famous cooks of Ordubad Asiman Tagiyev told Azertac that if you eat a slice of Ordubad omelet in the morning you do not feel hungry till the evening.

You cannot enjoy the cuisine of Ordubad anywhere else. You can only learn here the recipe how to prepare local dishes, but it requires skill to get the same taste.

Those who want to visit a medieval city and taste different meals may come to Ordubad. You can travel there by plane from the capital city, Baku or Ganja, the second largest city of Azerbaijan.