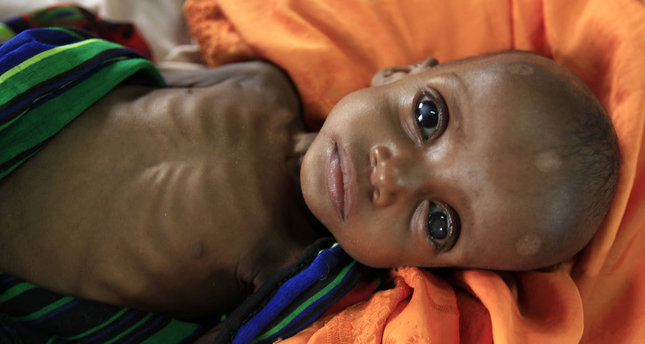 About 1.4 million Somali children could suffer from severe malnutrition, with 275,000 of them being under the acute threat of starvation, the U.N. Children's Fund (UNICEF) said on Tuesday. The U.N. is now calling for further funding in order to advert the crisis.

Axar.az reports citing to Reuters they include more than 275,000 children potentially facing a life-threatening severe acute form of malnutrition, who are nine times more likely to die of diseases including cholera or measles, UNICEF spokeswoman Marixie Mercado said.

The figures are offered by a projection for the current year of 2017, which exceed prior estimates from January 2017 by 50 percent. The situation is worsened by the fact that malnourished children are under a higher risk -9 times more likely- of contracting contagious diseases like cholera or measles, UNICEF spokeswoman Marixie Mercado explained.

"A severely malnourished and dehydrated child can die in a matter of hours if they do not get treatment for diarrhea or cholera. Measles, which can be transmitted via air, can spread like fire in congested displacement camps," she told Reuters.