"Letter to a soldier" campaign launched 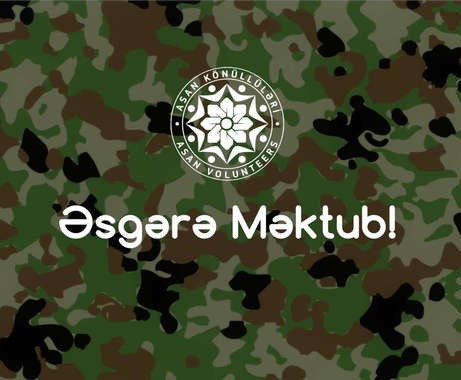 A campaign titled "Letter to a soldier" was launched by ASAN Volunteers Youth Organization.

The project aims to express gratitude to Azerbaijani soldiers, who fight for the liberation of Azerbaijani lands from Armenian occupation, support them in their glorious path and promote a deep feeling of patriotism among youth.

The event is taking place at “ASAN service” centers in Baku. Everyone can send a letter that will be delivered and read in military units.

For over two decades, Azerbaijan and Armenia have been locked in conflict which emerged over Armenia's territorial claims against its South Caucasus neighbor. Since a war in the early 1990s, Armenian armed forces have occupied 20 percent of Azerbaijan's territory, including Nagorno-Karabakh and seven surrounding regions.
Over the entire period of its existence, the OSCE Minsk Group, which acted as the only mediator in resolution of the conflict, failed to move forward in resolving the long lasting conflict, although the interested parties had pinned great hopes on it.

The situation on the frontline aggravated on April 2 after the Armenian military units in the occupied lands started shelling Azerbaijan’s positions.

To protect civilian population, the Azerbaijani Armed Forces launched counter attacks and as a result, the Azerbaijani troops retook hills around the village of Talish, as well as Seysulan settlement, and also took over Lele Tepe hill located in the direction of Fizuli region.

The hostilities renewed in the occupied Nagorno-Karabakh region of Azerbaijan on April 4, as the Armenian side continued to shell the Azerbaijani positions although the Azerbaijani side announced unilateral ceasefire on April 3.

The Azerbaijani Army destroyed about 370 enemy soldiers since the start of the hostilities, according to the defense ministry.