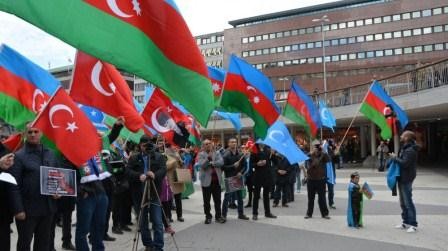 Azerbaijanis who reside in Sweden, members of the Turkish and Turkmen communities have staged a rally in central Stockholm to protest the Armenian provocations on the line of contact of the Armenian and Azerbaijani troops.

The protesters observed a minute of silence to commemorate those who lost their lives in the recent fighting on the frontline. They chanted slogans such as “Karabakh belongs to Azerbaijan”, “Armenia, stop invasion!”, “Karabakh is ours and it will be”, “Martyrs never die, Motherland won’t be divided”.

The protesters informed local residents about the Armenias` provocations that caused heavy casualties on the line of contact.