400 Azerbaijanis participated in a vocal protest 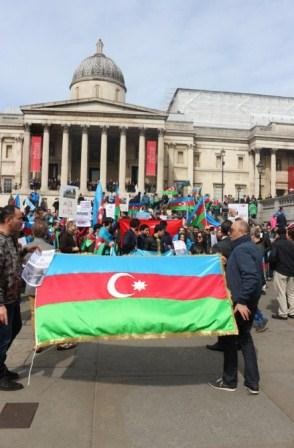 A group of over 400 Azerbaijanis, supporters of Azerbaijan, members of the Turkish diaspora and Londoners believing in international law participated in a vocal protest in the heart of London, co-ordinated by The European Azerbaijan Society (TEAS). This began in Trafalgar Square – a focal point for Londoners and tourists.

Waving placards and flags, and chanting such slogans as ‘Stop the Armenian occupation’, ‘Armenian troops out of Azerbaijan’, ‘Sanctions for Armenia’ and ‘Sargsyan – War Criminal’ – referring to the Armenian President’s previous role as a military commander – they continued down Whitehall towards the Palace of Westminster. They eventually stood in Richmond Terrace, opposite 10 Downing Street – the residence of British Prime Minister David Cameron.

One request was on their lips – that the UK should place economic sanctions on Armenia until it removes its military forces from the Azerbaijani territory of Nagorno-Karabakh and seven surrounding regions after more than 20 years of illegal occupation. A letter, signed by the leaders of TEAS and the various diaspora groups has been drafted and will be submitted to Prime Minister Cameron.

The protest came in the wake of an unprecedented level of violence on the ‘contact line’ between Azerbaijan and the Armenian-occupied territories, which has seen the death of 31 Azerbaijani servicemen and scores of civilian casualties. Echoes of this violence were brought to the streets of Paris, when Armenian activists attempted to stop a peaceful protest outside of the Armenian Embassy.

This unprecedented incursion has placed the Armenian–Azerbaijani conflict in the radar of the international media for the first time. All the major channels have sought to understand this conflict, whilst not fully understanding its background and significance, the facts having been shrouded in Armenian propaganda.

The time has come for Parliaments around the world to support Azerbaijan and place sanctions on Armenia until they implement the four outstanding UN Security Council resolutions that have been on the table for 22 years. These demand that Armenian forces leave Azerbaijani territory, enabling the estimated one million refugees and internally displaced persons (IDPs) – the ongoing victims of the occupation – to return home.