Azerbaijan has important role in rapprochement of cultures 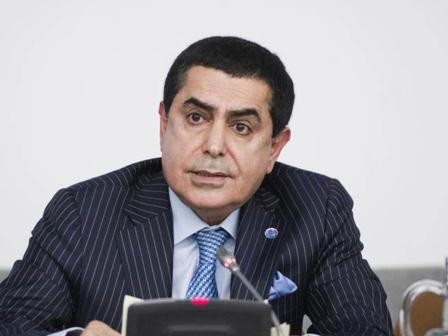 The significance of holding the 7th Global Forum of the UN Alliance of Civilizations (UNAOC) in Baku is that Azerbaijan is located at the crossroads between the East and West, a very important point of convergence of various cultures and religions, UN High Representative Nassir Abdulaziz Al-Nasser said in an interview posted on the UN website.

The 7th Global Forum of the UNAOC will be held Apr. 25-27 in Baku. It is planned to hold a meeting with participation of high-ranking officials and about 30 sessions during the Forum. The Baku Declaration is expected to be adopted during the high-level meeting of the UNAOC Global Forum. Azerbaijan's President Ilham Aliyev signed a decree on July 24, 2015 to create an organizing committee for holding the 7th UNAOC Global Forum in Baku.

As the UNAOC prepares for an upcoming global conference in Baku, the head of the UN body has stressed the need to leverage 'soft power' to curb the rise of violent extremism and prevent conflict.

"Since I took office three years ago, I see the challenges rising, especially coming from xenophobia, intolerance and radicalization," said Al-Nasser.

"As you know, the Alliance of Civilizations initiative came after "September 11" and attacks in Madrid and London," he noted, referring to terrorist acts in 2011, 2004 and 2005.

The diplomat stressed that the establishment of UNAOC in 2005 was in response to threats of clashes of cultures, religions and civilizations.

Given this situation, UNAOC's work must be more visible than ever, said Al-Nasser adding that his priorities also include addressing issues related to the growing migratory flows that are threatening international peace and security, and the spread of negative narratives, such as hate speech on social media.

"We are almost everywhere on the UN agenda," he said noting that he can capitalize on his experience as a former General Assembly President.