"We did not expect Armenian army to shell civilians" 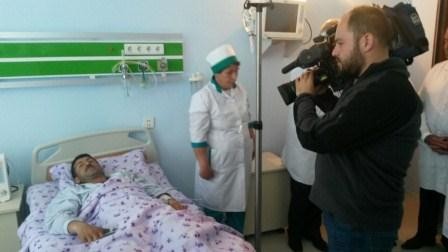 “We did not expect the Armenian army to shell civilians from heavy weapons,” resident of Chamanli village in Aghdam Ahmad Ahmadov has told local and foreign journalists who visited the district.

“Armenians started to shell our village with heavy artillery at midnight. Both Ali Huseynov and Famil Mustafayev received severe wounds and died as a result of the shelling. None of them left the village. Our patience is running out. How long can we live like this?! How can one call it a ceasefire? We are waiting for an order of the Supreme Commander-in-Chief to free our lands from occupation.”

The journalists then met with the wounded people at Aghdam District Central Hospital. They were informed that three residents were receiving treatment here. Other wounded residents are under ambulatory care.

Wounded resident Shebnem Garashova said the village was shelled suddenly. “We did not had an opportunity to go to a safe place as the shelling started suddenly. We tried to flee by car but they hit it. The explosion of the shell threw me into a channel, and I was wounded in my leg.”

Another Chamanli resident Arif Mammadov, who was also wounded in his leg, said: “We were subjected to shelling before, but it has never been this intense and heavy.”