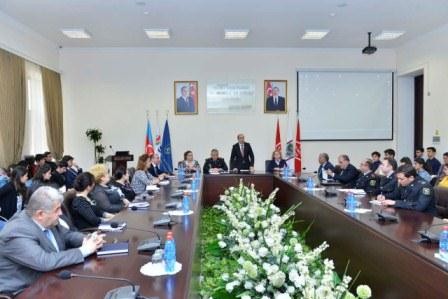 Police station of Khatai district of the Ministry of Internal Affairs of Azerbaijan and Narcological Center of Ministry of Health jointly held workshop on drug addiction at BHOS.

Opening the workshop BHOS vice-rector on general affairs Rashad Hasanov welcomed guests, stressed the importance of the meeting as well as measures taken by the government to combat drug addiction. BHOS vice-rector also said that the main goal was to raise awareness of students in the field of drug addiction problem of the youth, the ways of its prevention, problems it caused in society and the damage it caused to human health including the involvement of students in prevention measures.

Police colonel of Khatai district of the Ministry of Internal Affairs, Muradali Babayev extended his gratitude to BHOS management for organization of such a significant workshop noting the excellent conditions available at the higher school for students. Then M. Babayev talked about activities of law-enforcement authorities in order to prevent drug addiction, illegal turnover of drugs, the means of solving drug addiction problem at international level, the means of prevention, the spread of the drugs and the way drug addiction effected the society.

Head of the department of Narcological Center Afet Mammadova and the physician of the prevention center Dilshad Mahmudova thanked BHOS management for healthy conditions offered by BHOS for students. They shared necessary information regarding drug addiction, its symptoms, drug means, the way they affect human life and society, preventive measures taken against drug addiction, new curing methods and legislations adopted in Azerbaijan in this connection. The instructors called on the students to stay away from drugs and be closely engaged in awareness rising work. The session proceeded with questions and answers session.