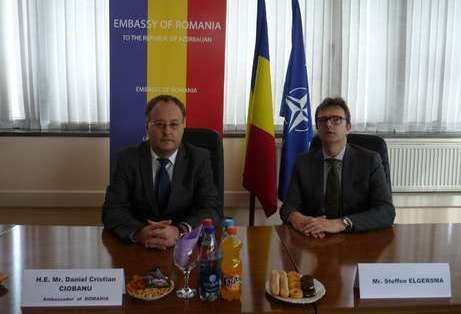 The embassy of Romania in Baku organized a workshop on NATO-Azerbaijan relations on February 17.

The event was held within the mandate Romanian diplomatic mission is fulfilling as NATO Contact Point Embassy in Azerbaijan (for the fourth time in a row). The Romanian embassy operates as an active channel for disseminating information about the role and policies of NATO.

The workshop was attended by political analysts and military experts.

Ciobanu underlined that Azerbaijan plays an important role in increasing European energy security. Due to its favorable geographical location Azerbaijan has huge opportunities in the field of transport. Romania will continue to support the development of cooperation between North Atlantic Alliance and Azerbaijan.

Romania, which has been the second country in the world to recognize Azerbaijan’s independence, considers that Azerbaijan is a strong and reliable partner of the North-Atlantic Alliance.

Representative of NATO's Political Affairs and Security Policy Division at NATO Headquarters, Steffen Elgersma, held an in-depth presentation about North Atlantic Alliance and its priorities. He stressed the mutual benefits of NATO-Azerbaijan partnership.

During the workshop the participants touched upon different elements of NATO-Azerbaijan cooperation.