Iftar dinner in Moscow at the initiative of Leyla Aliyeva - Photo 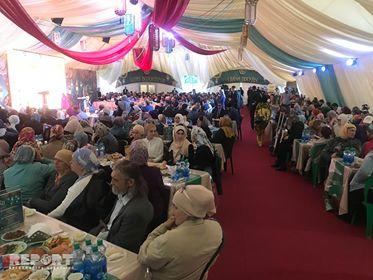 On the initiative of Vice President of the Heydar Aliyev Foundation, Chairman of the Russian Youth Union of Russia Leyla Aliyeva, the Day of Azerbaijan was organized in the Russian capital and was given iftar.

Representatives of public organizations, embassy of Azerbaijan in this country, Heydar Aliyev Foundation and other diaspora organizations of Azerbaijan, as well as representatives of various nationalities, took part in the event organized by the Council of Muftis of Russia on May 14 in the vicinity of Poklonnaya Kara Mosque in Moscow. , more than 1,000 people participated in the event.

Anas Mammadov, the representative of the Ikhlas Foundation, first spoke about the sacred month, the benefits of fasting.

Speaking at the event, Nizami Baloglanov, chairwoman of the Ahlul-Bayt society, said that the iftar dinner initiated by Leyla Aliyeva is a sign of respect for Islam in Azerbaijan.

Advisor to the Azerbaijani embassy in Russia Vugar Imamaliyev delivered the greetings of ambassador Polad Bulbuloglu. He congratulated the Muslims on the occasion of the Ramadan holiday celebration in Azerbaijan at the state level since 1993.

After the official speeches, singer Samir Salam performed religious songs and folk songs. Then a sura and Iftar prayers were read from the Holy Quran. Our compatriots have tasted Azerbaijani national dishes and sweets.

A video clip about Azerbaijan was demonstrated at the event. Copies of "Baku" magazine, multimedia discs, posters reflecting the beautiful places of our country were distributed.

It should be noted that the Heydar Aliyev Foundation's Russian office has been participating in the Ramadan Tent project of the Russian Mufti Council for already 14 years.